The Ship is a T.S.O.L.W.S ( The Soicety of Light Warship Class) it was made by Iron and steel. Bill modified it to have lanterns like all his ships and flew the TSOL flag along with the Gen of Peace logo. It was created on January 9, 2012.

It was named and the emblem was made in honor of The Great Leviathan.

It has standard broadsides but has been outfitted with the ammo Explosives. 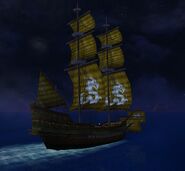 Most used to do material Rounds but also been fitted with a Dimensionalizer in the bow.It is also used along with the TSOLWS Maelstrom.

Retrieved from "https://gamersfanon.fandom.com/wiki/Yellow_Serpent?oldid=747744"
Community content is available under CC-BY-SA unless otherwise noted.