"Nobody's going to serve you if it doesn't serve them."

Yago gra-Khazgur was an Orc bounty hunter and mercenary who operated in Skyrim during the civil war period.

Born in the Mor Khazgur Orc stronghold in far western Skyrim within the Imperial-aligned hold of Haafingar, Yago was brought up in typical Orcish fashion, expected to become proficient in the coveted art of smithing and follow the warrior path of her ancestors. She earned her keep as a gifted huntress, mastering the way of the bow under the tutelage of the stronghold's master archer, Bagrak, who was often called the "Eye of Khazgur" for her deadly and impeccable aim. Her hunting expeditions often brought her to the far outskirts of the stronghod's territory, where she would catch glimpses of the mysterious outside world. Seeking to pursue the path of the worldly warrior like the famous Orc conquerors of eld, Yago left the stronghold at age 20 to enlist in the Imperial Legion; many Orcs seeking to explore Tamriel were welcomed with open arms into the regiments of Cyrodil, who coveted their cutural proclivities for battle and forging.

Yago, taking the surname gra-Khazgur to honor her home, traveled with the Torug Auxillary Corps of the Imperial Legion, an all-Orc company often dispatched to the far corners of the Empire to keep its peripheral populations in check. The young huntress enjoyed the work, setting a goal to learn at least one combat technique from each region she visisted. She took a particular liking to the ways of the famous dual-wielding Alik'r warriors of Hammerfell, where the Corps briefly served as "military advisors" to a paramilitary cell of Redguards in anticipation of an Aldmeri invasion. At 27, Yago and her comrades arrived in Valenwood on a covert mission to survey Aldmeri activity in the province. Their reconaissance efforts revealed the extent of the Thalmor "cleansing" of the native Bosmer population, much to the horror of the Imperial commandos. En route back to Cyrodil, the Corps were discovered by Thalmor Justiciars, and in the ensuing battle Yago made a fatal error by attempting to engage the Altmer commander in single combat; the entire Corps were wiped out apart from the huntress, who fled into the woods and began her trek back to Mor Khazgur as a dishonored deserter.

Yago resumed her regular duties within the stronghold for a time until her failures within the Legion were brought to light by Chief Larak himself. With her honor impugned, the young Orc made the brazen decision to challenge Larak to a brawl. She, predictably, lost, and was practically exiled from the stronghold that very night. With neither country nor comrade, Yago took to the road in search of new prospects. She had heard that there was coin to be made in Riften on the other side of Skyrim, and thus began her long march - by foot - to the Rift, hoping to make a living as a sellsword.

In Whiterun, the Orc crossed paths with a traveling Khajiit merchant caravan led by the matriarch Ahkari, who were also en route to the far east. She was permitted to travel with them in exchange for her services as a lookout, guarding the caravan against bandits and beasts alongside the fighter Kharjo, with whom she made fast friends. At last, the caravan arrived at Riften, whereupon Yago was forced to part ways with her new friends as the city guards refused to allow the "suspicious" Khajiits to enter the city's walls. Bidding them wishes of warm sands, the Orc entered Riften, where she quickly found work as a hired muscle for the Black Briar family and occasionally as an associate lifter for the Thieves Guild. The coin was good, but Yago found the work unfulfilling, taking little pride in prowling the city's streets at night to terrorize the enemies of the Black Briars. She left the Rift to pursue more stable work as a bounty hunter elsewhere in Skyrim at Kharjo's advice - he had found success in the field in prior years. Though Yago urged him to follow, the Khajiit warrior reluctantly spurned her offer, confessing that he owed Ahkari a life debt.

Yago's travels brought her to the isolated southern hold of Falkreath, where tales of her "cleaning up" the bandit-infested countryside nigh-singlehandedly quickly reached the ears of the hold's Jarl Siddgeir. Siddgeir had ascended to his position largely through subterfuge perpetrated by agents of the Legion, who favored him over his Stormcloak-sympathizing uncle Dengeir. He bestowed upon her the honorary title of Thane and quickly enlisted her efforts as his personal enforcer, dispatching her to eliminate threats to the Falkreath hold - and his rule as Jarl. The work quickly devolved into what was essentially state-sanctioned terrorism. Yago would routinely terrorize Siddgeir's political enemies, threatening to make examples of their children; by her hands, hold guards who refused to "play ball" often disappeared in the night; merchants were forced to carry Cyrodilic merchandise and pay a cut of their profits to the Jarl's growing financial empire. The Orc became known as Ice Heart for her willingness to execute any order without question, so long as the Jarl kept her coffers overflowing with septims. The profitable arrangement continued for nearly two years, at which point the Imperial Legion finally stepped in and threatened to depose Siddgeir if he did not immediately halt his racketeering, which had begun to sour the Empire’s reputation in Falkreath. Though she would have to halt her lucrative enforcer services, the Imperials took an interest in Yago’s efficient methods and requested she come to Solitude to discuss a career opportunity with Skyrim’s military governor, General Tullius.

Tullius had been dispatched to Skyrim to put an end to the escalating Stormcloak threat and put an end to the province’s increasingly devastating civil war; though he despised sellswords and their kind, he recognized the strategic value in hiring mercenaries such as Yago as full-time soldiers of fortune to eliminate the enemies of the Empire without needing to abide by the rules of engagement. Thus, the bounty hunter Ice Heart came under full-time service of the Empire on detached duty, to be dispatched parallel to the Legion or on solo missions whenever her expertise as a ruthless assassin was required. Taking up residence in Solitude, she became respected among the Legion for her valor and determination in battle, and hated and feared among the Stormcloaks for her deadly aim which spelled the end of many a rebel. When asked if she ever regretted “going legit” and signing on with the Empire and sacrificing her autonomy, she mused that “in a world without septims… (she) would be a Stormcloak through and through.”

While Yago tended to shirk many of the stereotypical combat specialties of the fearsome Orcs, she nonetheless carried with her the brutal and resilient spirit of her warrior race in every battle. During the infamous Battle of Whiterun, Imperial defenders on the front lines remarked that, so great was Yago's skill with the crossbow, that the bounty hunter was able to cover as much ground and fire enough deadly bolts as ten Legionnaires combined, breaking the desperate Stormcloak charges with deadly pinpoint accuracy. She preferred to work in the shadows, sniping combatants from a great distance and only engaging in direct combat when all other options were exhausted. Still, she could be a force to be reckoned with on the battle field, not hesitating to lead terrifying charges into enemy territory to cut her foes down with a flurry of dagger and sword blows when other tactics failed. Born with a genetically low magicka pool, she had little to no talent for the arcane arts on her own apart from limited Illusion spells to mask her presence. With little patience for bartering and diplomacy, she always preferred to settle disputes with a more "hands on" approach.

Yago was otherwise an adept alchemist and brewer, using her technical knowledge of dozens of Skyrim's flora to concoct deadly poisons and paralytics, with which she would often tip her bolts and blades. A skilled engineer, she had myriad practical experience in maintaining field equipment and could even rig up traps such as tripwires and pressure plated explosives in a hurry with limited resources.

The bounty hunter primarily utilized an enhanced dwarven crossbow, perfect for firing accurate, high-impact bolts from a great distance with as little recoil as possible. In close-quarters combat, she relied upon her infamous enchanted Ebony Sword imbued with life-draining energy, which she claimed she won from a notorious vampire in fair combat. 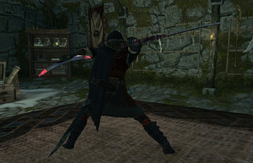 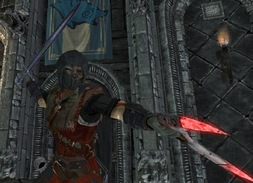 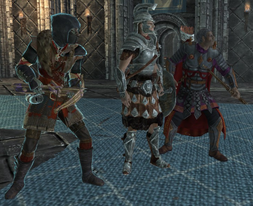 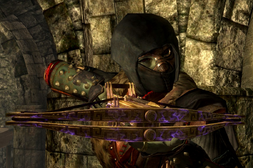 Add a photo to this gallery
Retrieved from "https://gamersfanon.fandom.com/wiki/Yago_gra-Khazgur?oldid=757874"
Community content is available under CC-BY-SA unless otherwise noted.