Wildrats Weapon Cache is Prince Edgar Wildrat of England 's private arsenal. This weapon selection is actually one custimizable sheath that can hold three weapons at a time. It is designed with a larger-then-normal sheath that actually holds more then one miniature sheathing device. The Weapon Cache current holds The Wildrat Blade, a sword and his prized weapon, Soleb, a unique dagger-gun combination.

The Sword is a large and powerful artifact that Edgar Wildrat made, after lifting it from the anvil the Prince decided to give this sword the name "The Wildrat Blade." He always keeps this sword near him in case he should ever have to protect himself or to just show off. Edgar Wildrat used this sword in countless battles including the Battle of Telltale HQ where he slew many.

Soleb is, undoubtedly the greatest dagger and pistol in the 17th century world. It has the unique combination of being a dagger and a gun at the same time. It was designed, made and is wielded by Prince Edgar Wildrat of England. The weapon is made from purest of silver with slight amounts of Iron placed in. The gun mechanism is made out of gold and copper. This powerful weapon is estimated to be worth over 1.5 billion rubles, during the 17th century. Edgar first discovered how to make this weapon by many experiments, which failed, the Dagger is said to have "top notch handling. A true masterpiece" the Gun is also widely acclaimed to be accurate as a musket and powerful as a blunderbuss. This is possible because of a loaded spring and gun powder. The barrel is reinforced which eliminates the odd of it bouncing around. Since it is quite obviously not a real gun it fires a remarkable small bullet at the estimated range of 10–25 feet. This weapon is always concealed in Edgar Wildrat's shirt sleeve, where it rests in a spring that will jump into his hand at any moment. 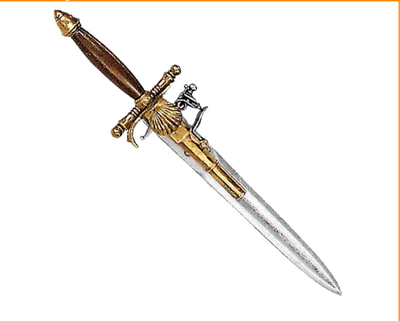 Retrieved from "https://gamersfanon.fandom.com/wiki/Wildrats_Weapon_Cache?oldid=739907"
Community content is available under CC-BY-SA unless otherwise noted.