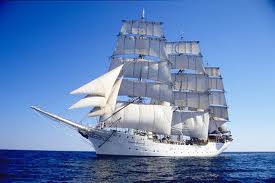 White Shadow is one of the ships guarding Isla Lusso.

These stats are very high due to the fact that this ship commands all other ships owned by Pirates plus it guards one of the richest islands ever known.

White Shadow was the very first guarding ship and the biggest. Created my Soar himself when the Island was created, this ship is said to be the biggest ship ever made, and the strongest. Shadow knew the island needed sea security and this ship is the main solution. It was made by Lightning Vessels. Captain Shadow Sail, the owner, was the main one to work on it, just one of the many reasons, this vessel is nick-named, "Unstoppable". It is now the boss of all other security ships not just by Isla Lusso, but everywhere and recently, named the boss of all ships owned by Pirates.

This ship has 800 broadsides and 700 deck cannons, it can sink any ship with one broadside. It has a speed of 100,000,000, it can catch any ship within seconds. It cost an unbelievable 10,000,000,000,000,000 gold to make thus ship. Soar went all out with this ship. It can say out at sea for years, with a max cargo hold of 800. The ship is currently used for anything Isla Lusso needs it to do. And, as mentioned, the ship also manages ALL security ships everywhere. The White Shadow is the boss of all security ships basically, meaning, the captain is the boss of all security ships. Who might that captain be? Captain Shadow. Soar picked him to be the captain simply because he is one of the best captains ever to be known and they are very close friends.

The ship has, 5 lobbies, 7 sleeping areas, room for 40 to sleep, 17 lounges, a giant captain's quarters, wheel house, many other places that can not be told. These other please Shadow likes to keep a secret.

Shadow wanted this ship to have a small crew. They didn't need a big big crew, or at least gunners. The ship has enough broadsides.

The crew of the White Shadow:

Retrieved from "https://gamersfanon.fandom.com/wiki/White_Shadow?oldid=748420"
Community content is available under CC-BY-SA unless otherwise noted.