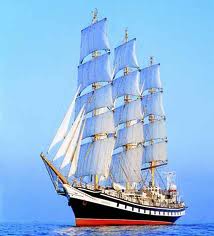 This was the very first ship to guard Isla Lusso, created by Soar himself, about 30 years ago when the island first opened. The ship's nickname "Tall Sail" fits the ship, Soar wanted it to have speed, to catch greedy ships and such, so he made the tallest ship...ever. The first ship took about 5 years to make and 10,000,000,000,000,000 gold. Much of that had to do with the towering sails. Soar made the plans all by himself at the age of only 20. Shipworkers couldn't believe it, nor could they believe Soar had the money. At first, they wouldn't build it, they said it required too much work, too much labor, too much time. Soar thought they were being lazy, so he moved on to a place where he knew he would be treated well. Lightning Vessels. King Shadow Sail, the owner, was glad to build him a ship. Soar paid Shadow way over asking price, the other ship company were furious.

This ship features a sleeping room for 40, 20 king sized beds, an immaculate lounge, a bar and food area, and captain's quarters. The ship also has one more unique feature, it has 90-pound cannons which are the most powerful cannons to be built. These cannons are in the broadsides as well as the deck cannons.

Retrieved from "https://gamersfanon.fandom.com/wiki/Wave_Guardian?oldid=754954"
Community content is available under CC-BY-SA unless otherwise noted.