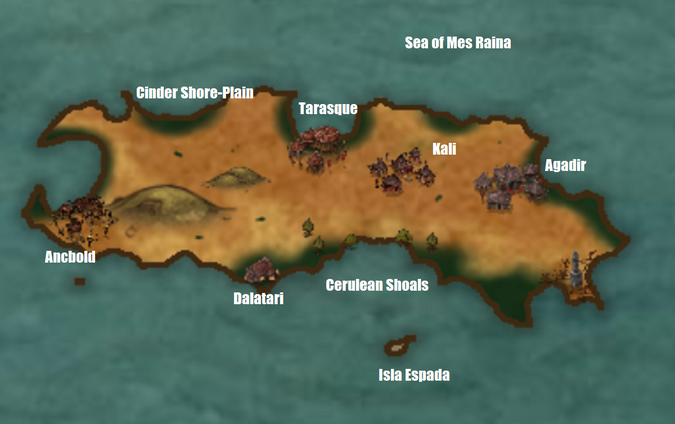 Voshe (VAWSH) is a small island continent in the northern Avunian ocean of the Aquila world. Its tiger shape is a sort of warning to those who would step foot on it; Voshe is infamous for its vicious wildlife and almost unbearably arid climate. However, the continent has recently become vastly more livable as a result of the formation of a strong yet federalized oceanic government centered at Agadir. A sizeable continental economy has formed, with strong ties to its neighbors in Aphelion. Towns are beginning to blossom and grow across the map, and the island has opened its borders to the world after centuries of isolation.

Bold denotes a city or town

Voshe is a small island continent with a tropical-arid clime and a diverse landscape composed of small stretches of plains and larger savannahs and deserts. The deserts are often ravaged by sandstorms that sweep away the corpses of those who succumbed to one of nature's other gimmicks. 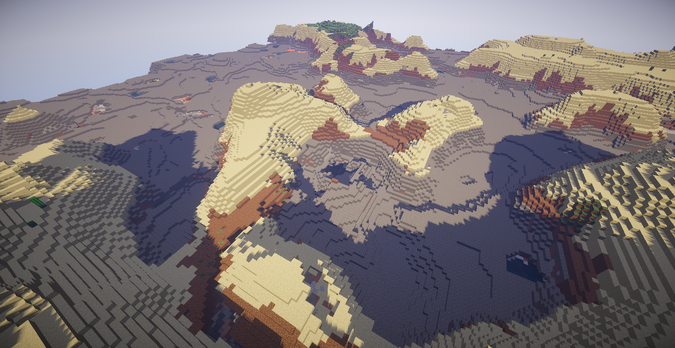 Before the Great Desynchronization, what is now Voshe was a scorching desert between small savannahs in southern Kilran, although its distance from the equator kept it from reaching extreme temperatures. Since then, despite the growth of greener biomes helping in cooling the land, the arid climate still leaves its citizenry scurrying to find anything that casts a shadow.

The epicenters of this climate are known as "Gravel Trenches", one of which is pictured above. In and around these hellish areas, the heat is deadly. If done for prolonged periods of time, breathing can scar the lungs; standing may burn the soles; even having your eyes open may dry them quickly. Those who have wandered within listening distance of one and had the fortune of returning tell a tale: when clouds cast their shade over these trenches, then and only then do the unfortunate souls who fell in without hope of escape find the strength to wail in unison, composing a haunting piece that makes its audience all but want to give them company.

Even away from these cemeteries, shields strong enough to deflect nature's wrath are few and far between, and foolhardy adventurers have paid the ultimate price after searching for one in vain. Those who have succeeded, however, founded settlements such as Pauper which stand strong to this day. Unfortunately for their citizens, protection from bandits was another issue entirely. 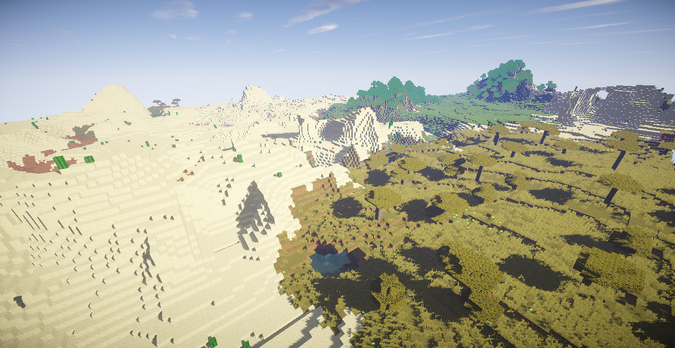 The savannahs and plains, on the other hand give Voshe's climate a docile touch. While still dangerous to the novice adventurer, the terrible creatures of the sands are replaced with relatively kinder bovines and ovines. Despite their agricultural potential, there was for a long time no sustained attempt to tap into the land for the benefit of the citizens at large; however, new projects by the provinces of the oceanic republic have brought jobs, food, and growth to many Voshi towns.

On, above, and often even beneath the ground of this treacherous island, savage monstrosities roam. Fashioned by the desert's fury itself, these once-friendly animals have evolved as has their thirst for human blood. Although they fail to best nature as the deadliest force, any starved adventurer who runs into one won't have to worry about hunger for much longer.

A Zkorch, messenger of hell

Among these beasts are Zkorches, mutated wolves with ash-black coats, deep crimson eyes, and ears listening intently for the sloppy steps of a dying wanderer. Their barks have been replaced with deep growls which echo their ceaseless agony.

They are unbelievably agile, zipping from their hiding places to an unaware adventurer's leg in the blink of an eye. They are also excellent climbers and top-notch jumpers, which means that when they sniff the sweat or catch wind of the cries of an injured traveler, running and hiding are roads that share an end: death.

The handful of adventurers that have been rescued from the maws of a Zkorch have all shared the same story: as they each looked into those crimson eyes for the last time, they saw not pupils, but burning strife; as they closed their eyes and fell at the paws of their would-be executioner, they heard not the wails of a creature long robbed of its soul, but their own.

They roam in packs most commonly around central Voshe, particularly Iguion. They are often caught and tortured by beastmasters to serve in the bandit "army", and those who fail the strict tests become sustenance and apparel for the criminals. Thus, people have a twisted "pity" for these creatures who, most likely, stood at man's side centuries ago as their partners.

A more reticent but nonetheless vicious beast is the Drilnid. These arachnids travel alone deep underground, leaving hot tunnels as "recordings" of their journeys. Their crimson skin seems as if it's peeling off, their burnt antennae point forward, and their golden eyes are, if a novice miner sees them, the last thing they'll ever see.

Although they seem to have sacrificed their agility, they are still deadly creatures. Their method of digging is quite peculiar: they spew fire from both antennae that is apparently hot enough to melt anything weaker than obsidian. The blood red webs they've left behind in these tunnels causes anything that comes into contact with them - including diamond - to practically evaporate. That can't bode well for an adventurer trapped in one.

No one who has decided to follow their tunnels to its end has returned, but rarely - twice a year, to be exact - a massive shriek shakes areas of the southeastern coast of the island continent. Much unlike a normal spider shriek, it creates rumbles strong enough to topple any buildings in the vicinity, and is of a pitch so high that any listener will hopelessly flee in pain. The source of these is unknown.

Although there are currently no captured specimens, word is they've got quite a short lifespan, as their carcasses litter much of southern Voshe's mines. They are usually concentrated in areas close to the mine's exit, and therefore sunlight. This has led some to believe that either sunlight is destructive to their delicate skin, or that seeing the sun is really all they sought to accomplish.

In short, Voshe's often unforgiving climate and its native beasts work together to end life, or make it impossible altogether.

Retrieved from "https://gamersfanon.fandom.com/wiki/Voshe?oldid=758021"
Community content is available under CC-BY-SA unless otherwise noted.