In my mind (as well as others) shadow just wants power. That’s why he joins fan groups to get power he then whines when he loses power, which is a great annoyance to the community. Whenever someone is promoted he moans because he wasn’t chosen, he also asks for power whenever there is a promotion.

Another issue with shadow is that he always fights over nothing, or if someone disagrees with him often ending with him having a cool down ban, he then complains to admins on other wikis in order to have himself unbanned. He then posts guilt blogs to the community in order to gain sympathy.

Sockpuppeting, shadow had a sockpuppet “sage”[i], he never got a ban or strike for 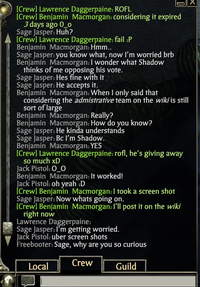 it I think this should be taken into consideration as well

In conclusion I think shadow needs a ban to learn to become more mature instead of acting immature against other users. I believe this is the only way shadow will learn to behave and become a respected member of the community.

Retrieved from "https://gamersfanon.fandom.com/wiki/User_blog:Voxelplox/Ban_Request:CaptainShadow11?oldid=678899"
Community content is available under CC-BY-SA unless otherwise noted.