Bobland is an island that some claim does not exist. Bobland is located in the uncharted waters of Potco to the south of Padres del Fuego. Queen Bobicus is the supreme ruler of this land and leads the totalitarian government. The nation is made up of eight provinces, each with its own governor. These governors have unlimited power within their district, but cannot do anything to harm Bobland or defy Queen Bobicus. The diversity of this beautiful island nation allows it to prosper. 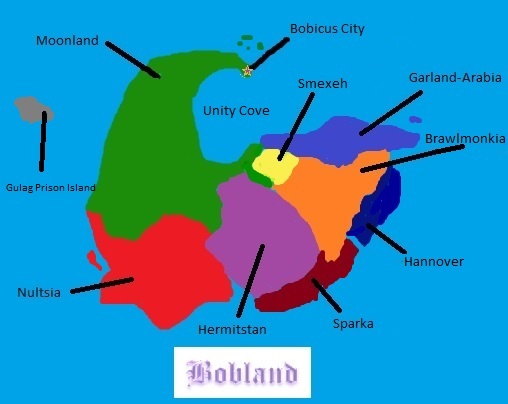 National Economy- Capitalism (although may vary by province)

This island is located off the west coast of the Bobland mainland. It serves as a penitentiary for the criminals of Bobland and enemies of the state. Gulag contains two camps; One for hard labor and the other for solitary confinement. No prisoner has ever escaped the island because it's impossible. Threats of time at the Gulag keep Bobland's crime rate shockingly low for its population. Once inmates are brainwa... I mean reformed, they are allowed to return to Boblandan society.

Motto: THROW IT OUT THE AIRLOCK!

Retrieved from "https://gamersfanon.fandom.com/wiki/User_blog:Bobby_Moon/Bobland?oldid=705327"
Community content is available under CC-BY-SA unless otherwise noted.