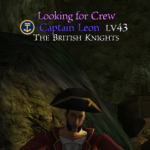 aka Prince of America

Blocked from the Wiki
931 Edits since joining this wiki
September 3, 2011

I am Captain Leon, formally known as Prince Edward Tudor on POTCO (in role-play). Unfortunately, Leon is now terminated. But, on Leon and any other character, I am the Role Playing nephew of King John Breasly (King George II). On Leon, I am in the guild ' The British Knights '. I enjoy leveling up, and looting at Dark Heart. I have now created a new account, his name is Seadog (name pending - Prince Leon). He is now level 19 and of course, unlimited. His d-name is XxCaptainLeonxX. I'm definitely willing to friend anyone who wants to, so just meet me. I like to hang out with friends. I am in the EITC Council of Elders and the High Council Of England. I was the EITC Lord, and I have founded many famous guilds such as :

It's been almost a year or so that I got Leon terminated, and I've gone through about 80 or so accounts. My days of role-playing are long gone, left behind with the time I was ages 10-12. I do very much (still) enjoy the game, for ALL it has to offer. I mainly loot, level, and socialize (which is my FAVORITE thing to do). I currently use a level 47 old medium named Matthew Sailscarlet and a level 50 new skinny named William McSkull. I shall continue to play POTCO for as long as it entices me, or just until I reach age(s) 14-15.

As of now, I've explained the "gist" of my story on POTCO.

There's nothing more you need to know.

Retrieved from "https://gamersfanon.fandom.com/wiki/User:Prince_Leon_of_England?oldid=755721"
Community content is available under CC-BY-SA unless otherwise noted.