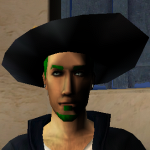 I have two pirates that are on my account currently:

-Mikey is in possession of three legendary weapons: The World Eater Blade, Blade of the Abyss and the Silver Freeze.

-Mikey has many brights and a few dark black shirts that he has found at Dark hart, South Idol, Tormenta, Timothy.

-Mikey is an Admiral in SVS!

-Mikey fails at PVP and is hoping to get War Master soon. (4 currently).

-Mikey has caught only one Legendary Fish- Speedy Lou

-Mikey has been playing POTCO since 2009

-Mikey Jr. has done all the jewelry quests!

-Mikey Jr. hopes to get a Legendary weapon, more famed, lots more brights and dark black, and better at PVP

Said to have originated from Ireland. But Mikey isn't Irish lol. Still looks awesome though. XD

Retrieved from "https://gamersfanon.fandom.com/wiki/User:MikeyMcNally18?oldid=644331"
Community content is available under CC-BY-SA unless otherwise noted.