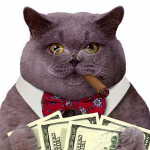 Guten tag <insert name here>! I am Blau Wolf XIII (formerly known as "Blue2095,") and I have been here since October 25th, 2012. My birthday is February 5th. I descend from mainly German and British bloodlines, although my entire family can be traced from over 13 countries in Europe! I currently reside within the United States of America (Mountain Time Zone). I mainly play on my Playstation 4, as I have a bias towards better graphics, audio, and controllers. I use an iMac as my main computer, preventing me from playing most of the games widely available for computer markets. Some of my favorite games include, Assassin's Creed II, Assassin's Creed IV, Far Cry 4, Battlefield 4, Civilization V, Victoria II, 0 AD, and Star Wars the Force Unleashed I/II.

Some of the various characters I have created, and I play as. Striked means deceased.

Retrieved from "https://gamersfanon.fandom.com/wiki/User:Blau_Wolf_XIII?oldid=725725"
Community content is available under CC-BY-SA unless otherwise noted.