All members of the Government must be in the Guild : United Union

Our Government is based off of two Cultures of Gov. a Monarchy, and Democracy. We like to think of ourselves as a Democratic Monarchy. The government is focused in one area, The United Houses. ( Like The Congress Houses in America, just with different names and diff jobs ) The house is divided into 2 classes - Noble Class and Supreme Class, Noble deals with matters inside the Country, and Supreme outside. The Leader of the United House is called the Secretary of the House

Head of Army - Not Taken

(Chorus)
The Union forever! Hurrah, boys, hurrah!
Down with the traitor, up with the star;
While we rally round the flag, boys, rally once again,
Shouting the battle cry of freedom!

We will welcome to our numbers the loyal, true and brave, Shouting the battle cry of freedom!

And although they may be poor, not a man shall be a slave, Shouting the battle cry of freedom!

She went down last October in the pouring, driving rain. The Skipper he'd been

drinking and the mate he felt no pain. Too close to three mile rock and she was dealt her moral blow, and the Mary ellen Carter sitting low.

There was just us five aboard her when she finally was a-wash. We worked like hell to save her all heedless of the cost. And the groan she gave as she went down, it caused us to proclaim That the Mary Ellen Carter’d rise again.

Well, the owners wrote her off, not a nickel would they spend. "She gave twenty years of service, boys, and met her sorry end. But insurance paid the loss to us, so let her rest below," They laughed at us and said we’d have to go.

But we talked of her all winter, some days around the clock, She’s worth a quarter million, a-floating at the dock. And with every jar that hit the bar we swore we would remain And watch the Mary Ellen Carter rise again.

Let her name not be lost to the knowledge of men For those who loved her best and were with her to the end, We’ll make the Mary Ellen Cater, rise again.

All spring, now, we’ve been with her on a barge lent by a friend. Three dives a day in a hard hat suit and twice I’ve had the bends. Thank God it’s only sixty feet and the currents here are slow Or I’d never have the strength to go below.

But we’ve patched her rents, and stopped her vents, dogged hatch and porthole down Put cables to her fore and aft and girded her around; And tomorrow, noon, we hit the air and then take up the strain And watch the Mary Ellen Carter rise again.

For we couldn’t leave her there, you see, to crumble into scale. She’d saved our lives so many times, living through the gale; And the laughing, drunken rats who left her to a sorry grave, They won’t be laughing in another day.

And you, to whom adversity has dealt that final blow, With smiling bastards lying to you everywhere you go Turn to and put out all your strength of arm and heart and brain And like the Mary Ellen Carter, rise again!

Last Chorus 2x Rise again, rise again, Thou your heart, it be broken, your life about to end, No matter what you’ve lost, be it a home, a love, a friend, Be like the Mary Ellen Carter: RISE AGAIN! 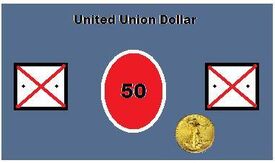 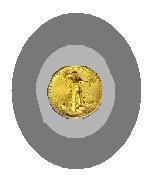 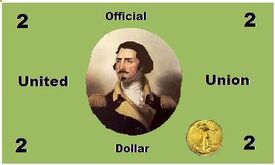 2 Dollar Bill
Add a photo to this gallery

The United Union uses Dollar Bills and Dollar Coins as our Currency.

The East India Union Trading Company Is the route of trade in the country. They also stand as Royal Privateers!

The Royal Family Airlooms is passed down from generation of kings/queens of the Union. 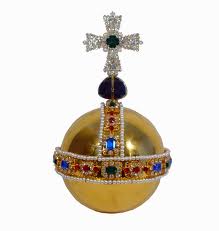 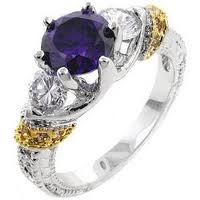 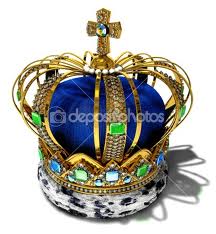 Royal Scepter
Add a photo to this gallery
Retrieved from "https://gamersfanon.fandom.com/wiki/United_Royal-Union?oldid=745592"
Community content is available under CC-BY-SA unless otherwise noted.