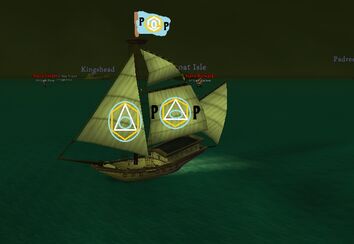 The XL Valiant is the newest Ship from Daggerpaine Industries. When not in use it is stored in the Cuba Airfield.

the most notable use this ship has been for is tracking the Queen Annes Revenge for the Gen Of Peace guild to attack it that position was taken by the New QAR Tracker. ﻿

With Daggerpaine Industries shipping likely to be targeted by enemies and looters an escort ship was needed. So Bill and Law made several War Sloops and souped them up to become escort ships. When not in use it is stored in the Airfield on Cuba.﻿

They are used to escort DI/TSOL frigates and merchant ships

Retrieved from "https://gamersfanon.fandom.com/wiki/The_XL_Valiant_Escort_Ship?oldid=746195"
Community content is available under CC-BY-SA unless otherwise noted.