The SWs are a secret but elite society meant on delivering peace to the world of NeddedCraft through the use of excessive, unnecessary, and stealthy force. They currently have targets spanning throughout the entire map and are rumored to ride in Protection 4 Iron armor and enchanted Sharp 5 diamond swords. They use a secret base in the middle of NeddehCraft, underground an abandoned and deteriorated village. The villagers were slaughtered for disobedience.

SUPER Wizard Farmer: Steely Dan "The Man with the Plan"

These are pictures of the detainment center and aboveground base of the GW's. 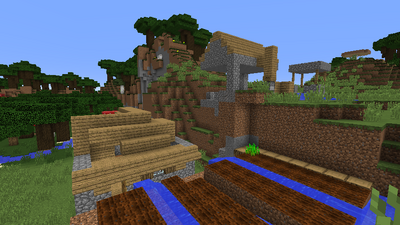 On June 28, the HQ was officially moved to random underground thing. Below are pictures. It is claimed and fortified. Some of the banners were also victory badges, stolen from enemies.

In the late hours of June 27, The GW's inspired fear to all Neddehcrafters by successfully attacking Krak, home to TheNextMaster and Rich_Fireskull. Below are pictures of the aftermath. None are safe.

THE SECOND ATTACK: THE FALLL OF TEMPUS

After traveling for nearly 4 hours, the SW's finally reached the famous city. Everyone except for the 2 GW's had gone to bed. Packing loads of TNT, and with an hour of planning, the attack began. After several failed attempts and realizing Cannonwalker had claimed so much of the island that A: no homes could be set, and B: no short range cannons could be built, they saught alternatives.

At 12:25 AM, the opening gate of Tempus was destroyed. The Golem was then lead out and executed. The attack continued. Then they began hitting individual homes and chestrooms, beginning with zoomers house and then the chest room 2 doors down. They eventually ran into a saddled pig; instead of killing it, it was brought far, far from Tempus and released from its captors. By 1:25, the attack was still on. Each house, memorial, and farm was soon to be attacked. At 2:40 AM, they breached the Nether building. It took much effort. When the reached the top floor, the decided out of pity to allow the Tempus citizens to keep their prizes - a star and a dragon egg- that would have been easy to breach because only glass was bearing them.

THE PICTURES BELOW ARE NOT IN CHRONOLIGCAL ORDER. JUST A BUNCH OF 'EM.

One SW alone infiltrated this bunker. Rich_Fireskull attempted to stop him, but he fell to the sword. All of the valuables were taken. Nowhere is safe.

On July 10, the SW's officially gathered back their resources and opened up their new base, gaining a new ally: Dcomando15. They spent hours arming new, fully protected diamond armor and Super OP swords. The base was then reclaimed to a bigger area and opened for all members. A second zombie grinder was picked up for faster enchantments. Also, a dinner party was held at Peter's Scrub house.

Retrieved from "https://gamersfanon.fandom.com/wiki/The_SWs_(NeddehCraft_2.0)?oldid=755443"
Community content is available under CC-BY-SA unless otherwise noted.