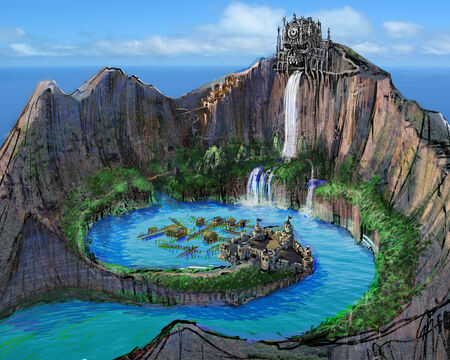 The Outlands is an island in the northeastern area of the Caribbean. It is inhabited almost entirely by the natives living on the island, who are all immensely involved with voodoo rituals.

It has a very dark history, starting with a civil war between the natives, eventual interference from the European powers, all culminating with the rise of Nitidus. It's said that any outsider who stays on the island for an extended period of time goes insane, although this has not been proven.

The main boss of the island is Nitidus. The side bosses, both of whom were resurrected by Nitidus, are Cucaracha and Cafard.

During the age of old imperialism, many European nations attempted to colonize this island due to its bountiful resources and the fact that it was already built up by the native inhabitants. However, each nation failed their quest for colonization under mysterious circumstances. Each one refused to give it a second try and the soldiers in each failed conquest refused to talk in great detail about what happened.

According to reports from European soldiers attempting to colonize, the following information was gathered:

The docking area is where sailors who plan on making a stop dock. Due to the island being surrounded by mountainous land, one has to sail through the spiral-shaped water passage and into the village area to dock.

The village is where most of the inhabitants of the island live. There are always voodoo rituals going on in the village, even during nighttime.

The castle is a complex structure built by the natives. It is right next to the village, on the opposite side of the pathway to the forest.

A pathway between the Village and Forest. It contains Undead Witchdoctors and Undead Slashers.

The pathway that leads from the Village up into the Skull. The forest is riddled with Undead Spanish Capitans, Undead French Capitaines, Undead Gypsies, and Undead Captains.

A giant skull structure built at the top of a mountain. The island's waterfall pours out of its mouth. Inside of the skull is a pathway riddled with puzzles and enemies that eventually lands you in the center of the mountain.

At the end of the Waterfall Skull's pathway is the entrance to a chamber. Inside this chamber is where you will find Nitidus.

Note: If you haven't completed the Treasure Map, you won't be able to enter the chamber.

Retrieved from "https://gamersfanon.fandom.com/wiki/The_Outlands?oldid=705074"
Community content is available under CC-BY-SA unless otherwise noted.