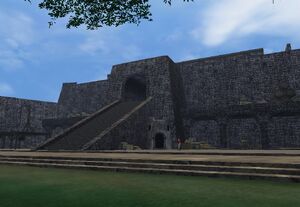 Over the course of the raid, The Outlanders killed numerous Navy and EITC soldiers, including EITC Grunt Zachariah Sharp. In addition to killing various Navy and EITC men, the group also burned various arrest warrants (including a few belonging to members of their guild) and debt records. Although the Navy and EITC suffered many casualties, lost various arrest and death warrants, and potentially lost hundreds of thousands of pounds in lost debt records, The Outlanders walked out of the raid with no casualties and only two injured men, neither of which were fatally or badly hurt.

The Outlanders had finished sinking a few EITC ships earlier that day and decided to dock at Port Royal. After going about their business, Outlander Richard Raidrage suggested that they raid the island's fort. There was a large amount of approval from the rest of the guild, so they decided that said raid would be.

Add a photo to this gallery
Retrieved from "https://gamersfanon.fandom.com/wiki/The_Outlandish_Raid_of_Fort_Charles?oldid=698166"
Community content is available under CC-BY-SA unless otherwise noted.