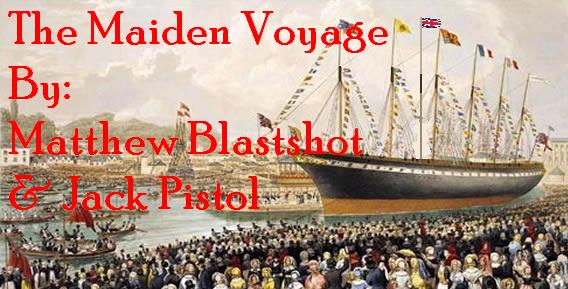 The Maiden Voyage is a movie written by Lord Matthew Blastshot and Jack Pistol and is produced by La Mafia Productions. It tells the story of the events of the HMS Victus and her Faithful Maiden Voyage. On March 30, 1760 the HMS Victus began her maiden voyage bound for The American Colonies. Passangers of the ship included The Daughter of Lord Matthew Blastshot, , Princess Amelia Augustus of England, Admiral James Thomas of the Royal Navy, the Ships Designer John Newton, the Ships Constructor James Adams, his wife Jane Adams, and Lord Cornelius Hardy and Captain Anthony Smith . The Ship also held over 500 lower class passangers. Including the poor Son of Jackson Pistol, Christoper Jack Pistol. Victoria was engaged to be Married to Lord Cornelius Hardy arranged by her Father. Victoria believe going to America was as if she was going to a Prison. While aboard the ship Isabella and Christoper shared a deep love. A forbidden love aboard a doomed ship.

Note: More Characters will come as we Begin writting

Retrieved from "https://gamersfanon.fandom.com/wiki/The_Maiden_Voyage?oldid=714124"
Community content is available under CC-BY-SA unless otherwise noted.