The Macabre Sabre is a legendary cursed blade that can only be found on Raven's Cove. It is extremely rare, being almost as hard to find as the Lost Sword of El Patron. The Macabre Sabre is known for its high attack level, as well as powerful skills.

Upon examination of the blade, historians have confirmed the "Macabre Sabre", as it is commonly referred to, to be more than 1,700 years old. The blade was crafted from rhodium: an extremely durable and tempered noble metal known to be almost impossible to rust. The hilt was made from pure gold, then bejeweled with black-coloured gems. Furthermore, the sharp, razor-like blade contained mysterious pigments, turning the sword a ghastly black colour.

It is not known exactly who crafted the blade. The sabre, enshrouded in mystery was likely crafted at the hands of Syrian blacksmiths circa the 1st Century BC, as the materials used in the blade (rhodium and gold) are native to the region of Syria. After the sword was finished, it was presented to King Seleucid of Syria, who treasured the sabre as a gift from the gods. He became so obsessed with the blade, he wished for it to never fall into enemy hands. Therefore, he ordered his mystic aurors to place an enchantment on the sword. However, the enchantment failed and cursed the blade rather. Seleucid suddenly and mysteriously died shortly after.

Years later, Pompey the Great conquered Syria for the Roman Republic. Upon salvaging valuables from the late Seleucid's palace in Damascus, the sword was discovered. Seeing it to be valuable, Pompey ordered the sword to be taken to Jerusalem, where it would remain for more than 1,000 years. The sabre was placed in the Temple of Solomon where, after the temple was destroyed, would be forgotten for centuries.

After the fall of the Roman Empire in 476 AD, various Byzantine, Persian, and Arabian groups controlled Jerusalem for centuries. In the late 11th century, however, Jerusalem was conquered by the Saracen Empire, led by King Sal ah Din. Around the same time, the First Crusades began, and English forces led by King Richard II laid siege to the holy city. Finally in 1191, Jerusalem was captured by the Knights Templar. During this time, the Temple of Solomon was excavated, and the Macabre Sabre was rediscovered. Upon further examination of the mysterious blade, English scholars and priests claimed the sabre to be a "Holy Relic". In 1197, the sword was transported to Vatican City, to be enshrined as a Holy Relic.

The following year, Pope Celestine III suddenly died of unknown causes. This is likely due to the curse placed on the Macabre Sabre, now being held in the halls of the Vatican. Vatican priests realized the evil placed in the cursed blade, and proclaimed it a "Work of Satan". It was immediatly moved to the Thénac Monastery in Aquitaine, France, for safe-keeping. It would remain there for about two centuries.

In 1453, following the close of the Hundred Years War, France presented numerous gifts to England as a sign of peace and respect. Among these gifts was the Macabre Sabre. Up until that point, the supposed curse on the blade had been forgotten, and the English accepted this gift with joy. The sabre was then held in the Tower of London. Then, in the late 1460s, King Henry VI of England was imprisoned in the Tower of London. On May 22, 1471, he was executed at the age of 49. His supposed execution weapon: the Macabre Sabre.

In the following centuries, the sabre served as an execution weapon in the Tower of London, killing notables such as Anne Boleyn, Guy Fawkes, and Sir Walter Raleigh.

In 1722, with executions becoming less common at the Tower of London, the Macabre Sabre became less needed. The same year, King George II of England decided to present the sabre as a gift to Governor Frederick Calvert, the British governor of the colony of Maryland, who was a huge collector of ancient relics. In April of that year, the HMS Edinburgh made its way to the American colonies, with the Macabre Sabre on board. However, only two months into the journey across the Atlantic, the Edinburgh&nbsp was attacked by Spanish privateers, captained by a Spaniard named Eduardo Núñez. Núñez plundered all valuables aboard the English vessel, including the Macabre Sabre. He favoured the mysterious sword, and began using it against his enemies. However, only eight days after achieving the Macabre Sabre, Núñez suddenly died. Moments before his death, he was able to pass the blade on to a dear friend of his: a Spanish explorer named Humberto Diaz, more commonly known as "El Patron".

Upon El Patron's expeditions in the Caribbean, the Macabre Sabre was one of his most prized swords he sealed away, along with himself and many other legendary swords. 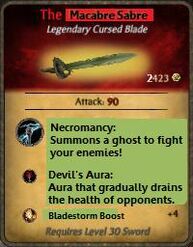 Add a photo to this gallery
Retrieved from "https://gamersfanon.fandom.com/wiki/The_Macabre_Sabre?oldid=744076"
Community content is available under CC-BY-SA unless otherwise noted.