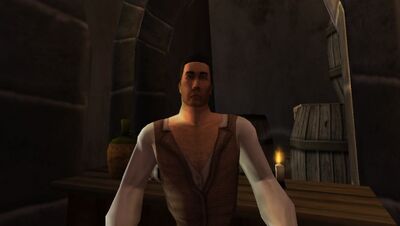 I was born, well, Jack. I have no recollection of what my last name was, nor did I really care much. I grew up in Tortuga, in a small hut shack that barely deserved the title of " Home ", yet alone House, but to me this cabin was more splendid than all the mansions in the world, for It kept me dry when it rained and kept it breezy when the scorching heat of summer rolled by. It didn't have much room in it, and there was only one room to it all, not counting a secret trap door that I used frequently as a Fort/Pirate Ship/Castle. My father and mother were pilgrims from the land of England who strayed a little too far into the Caribbean seas, and settled on the island not more than 2 years before my birth. My father worked in the shipping business as an aide to any Merchants who needed some extra muscle in their expeditions or as a Laborer to help pack the goods that were ready to be sailed out. My mother ran a Seamstress's' shop out of our hut, and got those few extra gold pieces to help us make a living or get us through the week when my father was out of work. Most weeks we managed to get by, but some winters we lived on little but barley and wheat. Nevertheless, all was well in my world, for what does a 5 year old truly worry about? If only I knew what would happen next in my not so many years...

It had been a quiet afternoon in the Town of Tortuga that day, aside from the bar brawl that ended in a few shots ringing out and a bartender caught in the cross hairs, and I had been running around the town bothering whomever so got in my way. My mother beckoned for me and I scurried to our hut where we prepped supper. Then, there was a opening of the door and my father ran in.

My mother asked, "What's with all the rush hon-?" " No Time! Black G-Guard at the d-docks!," hollered my father.

I was scared by the fact that my father was yelling at us. He never screamed at me or my mother.

"Jack... Jack you have to get into the basement, you have to go before they ar-" He stopped when he heard the wails of townsfolk and the shouts of orders from what seemed to me gruff, fearless voices.

My father heaved up the trap door and gently pushed me inside. "Look son, stay here, stay under this door and don't come out until it's quiet. You hear me?"

The voices muffled, I heard what sounded like a Gentleman's voice ask a question and my parents responded. He asked the question again, only a little louder, to which my parents again responded. By then, the voices had escalated to near deafening proportions. " HAVE YOU DONE THIS DEED?!?" said the gentleman, except now he sounded like a man near the breaking point.

"No!" answered my parents.

"Men! Do It!" said the stranger's voice.

I heard what sounded like somebody chopping clean through a slab of beef and I opened the trap door a fraction of an inch.

I saw a floor splattered with a crimson color I knew was only one thing. I opened it only a slight more and saw two bodies crumbling to the floor, both of them split down the middle.

For the briefest second I gasped in awe. Suddenly, someone stepped on the trap door. I then felt pain I'd never felt before as I blacked out.

I awoke to a pulsating pain in the head and a splinter of light filing through a small crack in the floor. For a split second I thought I was in bed, covered by blankets and my Mother was making that smoking aroma, cooking my favorite breakfast. I realized that this smell was like that of burnt wood and only then realized what had happened. I sat straight up and saw that I had stumbled down the stairs after I fainted. I sprinted up the stairs and slowly pushed the trap door. I looked at what was once my front door. Once. Now only bits a pieces were left of it, and the frame had turned into ash. I turned all around and saw a smoldering wreckage of my home, nothing stood, nothing remained. My gaze fell on the floor where I stared at my massacred parents, cleaved in half by a weapon I knew not of. The floor was no longer a dullish gray but a flashing ruby red. I collapsed to my knees and looked at what had been my parents, alive barely a half day ago. I wailed like no-other. I only felt the pounding pain in my head and the sorrow of having lost my parents, those i looked up to all my short life. And suddenly a quote my mother spoke sometimes came into my mind.

" We are all born unto flames "

It had been 3 days after the hut burned down. I hadn't done a thing since the incident, didn't eat, didn't drink, nothing. I had become used to being given what I asked for, when I asked for it, as soon as I asked for it. Of course though, Tortuga is not a place of such pleasantries. It was a man shoot man world, and the man with the loaded pistol and the faster draw ended up with what he wanted, not the meek little child with just clothes to his name. I was near famished, near death and barely breathing. I had given up on life. Yet, it seems, life wasn't ready to give up on me.

I was huddling up inside a barrel waiting for the cold embrace of death to arrive when I heard noises above.

"Get out of The King's Arm and don't come back you mangy urchin! " hollered a man I presumed to be the owner of said Tavern.

" Fine! I'll head over to The Bride where at least they have FOOD for scraps! " shouted a voice of a man, wait, not a man, but what sounded like a child in his early adulthood years. " Filthy, lousy, darn place, " whispered the same voice as the Bar's door closed.

I had decided that peeking over the top of the barrel was safe enough, and my gaze fell upon a person who was no older than 14, dressed in an assortment of clothes so dirty they were jet black. He had a face that was hardened from years of scrounging yet had a soft touch that had not left his being. I stood up in the barrel and ended up toppling over and spilling all over the gritty sand.

The Urchin jumped 3 feet in the air and drew what what looked like a small sword. "Who's over there! Get out or I'll throw it!"

He sheathed his weapon. " Careful who you pull that on kid! Get yourself blown with holes if you do that too often. "

" Heh. Funny. Never thought I'd meet somebody with a stranger name than Edgar Pillagewrecker," He said.

" Oh. Ha, that's me." Edgar responded. " Not a good name, but I'm not a-trading it any time soon. So, what ye doing in that poor excuse for a container?" He said with a touch of sarcasm.

" Nowhere to go to. No home, No house." I replied solemnly.

"Ah shoot kid.... Come with me to the Scrounger's Sanctuary!"

"The what?" I asked hesitantly

The young man laughed, "Here, follow me." He then persisted to tug me by the arm and dash through the beach to a new land, and a new life.

Retrieved from "https://gamersfanon.fandom.com/wiki/The_Life,_Lies_and_Tragedies_of_Jack_Shipsteel_1?oldid=742801"
Community content is available under CC-BY-SA unless otherwise noted.