The Hospitallers were founded by TheNextMaster2 conquest of the surrounding peninsula in Neddeh Craft. While It may not be the best place to build the City of Krak De Chevaliers, the surrounding wooded area behind it will provide as the Orders Wood source and escape route.

The Hospitalliers, being Crusaders, are the French brothers of the English Templars, and while the Sith Lords are mysterious to the Hospitalliers, they still envy people who are potential allies.

The wood land and construction of walls.

The bridge into the constructed city. 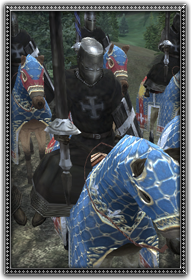 The Principality of Antioch
Add a photo to this gallery

The Hospitaller Hospital is the first building to be designed and planned while Sam was clearing out ground, the Idea had come from DrLithuim_ who had asked if Krak De Chevaliers was going to have a Hospital. Sam said yes and began to clear ground for the Hospital. The planning started on Januray 24.

The next day, Sam got on NeddehCraft to do the same thing, Clear ground and mine after dying multiple times, he then realized he wouldn't build until all the ground was cleared either by payment or by himself.

Shortly after the morning when Sam got on, Lith came to Krak De Chevaliers and saw walls, he then requested that a Temple be built for the Sith Forces, Sam agreed, and envied the fact that he would have Acolytes from the sith to be trained in hospitality for the Hospitalliers, while few would still pratice Dianite and the Sith lords. The Sith temple was completed on January 26 by DrLithium's request after sam had caused another riot in the Academy. The Sith Temple is the first building and also one of Sam's first assists on the claim.

Retrieved from "https://gamersfanon.fandom.com/wiki/The_Hospitallers_(MC)?oldid=731084"
Community content is available under CC-BY-SA unless otherwise noted.