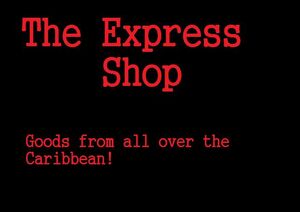 The Express Shop is a shop that sells luxurious foods, items and weapons from all over the Caribbean. It is located in Port Royal. As a pirate improves their fighting skills and notoriety, they will receive quests from The Express Shop that will unlock various other products. The merchant, Passion Fruit, will contact the player when the time is right and issue the quests that will unlock more and more items in the shop.

Assault Broadsword: 2000 Gold - 36 Attack - Despite having a below average attack stat, the Assault Broadsword has a wider than normal attack range, allowing you to hit more enemies from farther away

Obsessive Cutlass: 10000 Gold - 64 Attack - In addition to its good attack status, the Obsessive Cutlass gains even higher attack power and combo speed the more enemies you kill. However, the higher the attack and speed, the faster they will start to drop, so make sure to keep a steady stream of kills!

Sabre of Denial: 25000 Gold - 52 Attack - Not only does the Sabre of Denial offer a good attack stat, it skyrockets your chance to parry attacks! However, if you do happen to get hit, the damage you take will be increased, so make sure to use your near-invulnerability to finish your enemies quick!

The Flaming Fencer: 40000 Gold - 73 Attack - The Flaming Fencer is just what the name implies - a cutlass that sets your target on fire! Despite having this ability, though, there's a drawback: mistiming your attacks will cause this sword to set YOU on fire! Don't just flail this beast around!

The Cursed Warden - 50000 Gold - 80 Attack - This is a true powerhouse of a broadsword! In addition to high attack and long range, The Cursed Warden summons shackles to chain all your opponents down whenever you hit them! However, nothing is perfect, and if you mistime your combo attacks, the shackles will chain YOU instead!

Risky Play : 60000 Gold - 96 Attack - The Risky Play has a special ability that allows the user to inflict MUCH more damage to the enemy! However, there is a drawback: you have a high chance of missing on each and every one of your attacks. Make every hit count!

Assault Pistol : 1000 Gold - 14 Attack - While it may have a low attack stat, the Assault Pistol more thank makes up for it with a much longer attack range!

Rulebreaker : 5000 Gold - 26 Attack - With the Rulebreaker, you receive not only decent attack power, but also the ability to shoot living enemies! Now you can shoot both the Undead and the Living!

The Double Dip : 10000 Gold - 40 Attack - The Double Dip can shoot two bullets at once, inflicting double damage to the enemy! However, because both bullets must be reloaded, reloading this beast will take longer.

Megaton Gun : 25000 Gold - 67 Attack - This beast right here fires explosive bullets that hit not only your target but other enemies around it! However, the Megaton Gun has a drawback - not only can those grenade hit YOU as well, but the bullets are quite heavy, and the attack range is low.

Drawing a Blank : 40000 Gold - 80 Attack - A Blunderbuss, the Drawing a Blank has a wide range of attack and allows you to deal extreme damage to your targets when close up. However, the farther you are from your enemy and the more indirect your attack is, the lower your damage will be.

Frostbite : 50000 Gold - 87 Attack - A Blunderbuss, the Frostbite has a wide range of attack and freezes all your victims upon contact! Despite being awesome, however, there's a drawback: the weapon absorbs 10% of your voodoo power upon firing, and should you have less than 10% of your voodoo, the weapon will fire water instead.

Army of One : 80000 Gold - 96 Attack - In addition to having a high attack power, the Army of One pistol possesses significantly higher "Take Aim" speed and firing speed, an amazingly high critical rate, and a great attack range! Most importantly, it offers INFINITE AMMO for all bullet types and never has to reload! Despite being one of our best creations, however: the Army Of One, like the Frostbite, requires voodoo to fire - 10% of max to be exact, and if you happen to have insufficient voodoo power, the gun will fire at the cost of reducing your health to nearly nothing.

Heathen's Dagger : 3000 Gold - 18 Attack - Not only does this beginner's weapon have a good attack power, but it improve backstab efficiency!

Razor Edge : 10000 Gold - 38 Attack - Equipped with sharpened shark teeth all along it's edges, this dagger here will wound your enemy severely if it so much as touches their skin. However, this baby won't discriminate, and handling it wrong will prove... bad.

Raven's Claw : 25000 Gold - 54 Attack - A pure black dagger that mixes great attack power with the ability to blind your foes! That's right, each and every attack you land on an enemy will blind them, lowering their accuracy by a great amount and their chances to hit you with it! However, the weapon requires voodoo to operate, sapping your voodoo with your every move. Should you run out of voodoo, the weapon become little more than a metal stick.

Ravaging Raptor : 40000 Gold - 74 Attack - A weapon that seems to have an endless, destructive hatred for life that has been held back for too long. This monster here has an extremely high combo speed and can pull off multiple perfect combos in seconds! However, it is pretty uncontrollable, and the timing margin for your combos will be strict. In the case that you do mistime it, all the damage that would normally be inflicted on your enemy will instead be inflicted on you.

Ruler of the Seas : 50000 - 96 Attack - Our greatest dagger masterpiece, this dagger not only has one of the highest attack stats you can find in the Caribbean, but it also absorbs the enemy's health and voodoo and gives it to you! However, even our greatest products aren't perfect, and if you mistime your combo moves, your health and voodoo are transferred to the enemy instead.

Blindsiders : 3000 Gold - 26 Attack - A set of knives with a good attack stat that has the ability to backstab foes from afar!

Cassowary Claws : 8000 Gold - 35 Attack - A mystic set of knives with points so sharp, they easily wound whatever they hit. However, such power is not easily handled, and combo timing becomes more strict. If you mistime your throws, these daggers will wound you as well.

Scorpion Stingers : 20000 Gold - 47 Attack - A mystic set of knives coated with acid that comes from the dagger itself. Upon contact, the acid will begin to burn through the victim's skin and bone. However, this powerful venom is also easily spread, and mishandling the weapon will result in pain for the user.

Dynamo Daggers : 40000 Gold - 80 Attack - A mystic set of knives that is notoriously powerful and is also rarely used as a striking weapon. The bulk of these daggers will stun your enemy with pain upon contact, leaving them wide open for more attacks. However, such weight is hard to handle, and the daggers have a rather short range in comparison to other throwing knives, along with a lower combo speed.

Lost Souls : 50000 Gold - 77 Gold - A blessed set of knives that seems to follow the user's target. However, they require voodoo to operate, 2% per attack, and if you don't have enough voodoo, the attack power is reduced to 1.

Terror of the Skies : 70000 Gold - 96 Attack - A mythical set of knives that has an extremely high attack power, plus a great attack range and critical rate. The only drawback is that mistiming your combos will stun you for a few seconds.

Acid Pot : 20 Gold Each - These grenades not only have an area of affect superior to even Stink Pot grenades, but they also all have the ability to burn anyone caught in the blast with a lethal acid, a mixture of Dread Scorpion venom and Ancient Fly Trap acid. Bombs, however, do not discriminate, and should you be caught in the blast, you will be damaged by the acid as well.

Pirate Bomb : 50 Gold Each - These destructive grenades have an extremely long range and can decimate any land opposition with a single blast. Since it can remain in the air for much longer, it can be used to sink ships when no cannons are available.

Corruption Staff : 20000 Gold - 47 Attack - A bizarre voodoo staff with the unique power to distort voodoo spell wavelengths. Voodoo spells that target the wielder may be reflected to damage the attacker, and even if they manage to break through the reflective shield, the attack will either miss or, more rarely, hit and deal half damage only.

Molusk Relic : 40000 Gold - 56 Attack - A cursed voodoo staff with the unique power to reduce the enemies' moral by attuning them and using magic. This staff can attune up to 10 enemies at a time. The attunements, however, CAN be shattered.

Celestial Staff : 100000 Gold - 96 Attack - An otherworldly voodoo staff with the power to rain meteors upon the Earth. The wielder can call a meteor to strike wherever he/she desires.

The following weapons are superior to most others in the Caribbean. They not only have a good attack stat, but they have multiple helpful abilities. However, these weapons can only be unlocked after all other "normal" weapons of their kind have been unlocked as well. Other than that, they truly are great weapons.

Seraph Blade : 40000 Gold - 90 Attack - A fabled cutlass that has been passed from generation to generation of angelic warriors. Adorned with pearls and rubies, the spirit of a generous angel resides within it, helping just wielders in battle.

Dusk Pistol : 40000 Gold - 78 Attack - A treasured, one-of-a-kind pistol imbued with the essence of sunset. Made of gold, it is the dream of all marksmen.

Riverflow : 40000 Gold - 85 Attack - A treasured, one-of-a-kind dagger imbued with the essence of water. Tinted a light blue, it is sought after by every bandit.

Stinging Spurs : 40000 Gold - 73 Attack - A treasured, one-of-a-kind set of throwing knives imbued with the essence of nature. All tinted a dull green, it is every hunter's dream to own this set.

The following weapons are perfections. This means that they not only have a higher attack stat than all other weapons of their kind, but their abilities have absolutely no drawbacks. The only drawback here is on that applies to all of them: these weapons can only be unlocked after all other weapons of their respective kinds have been unlocked as well. Other than this, the weapons are perfect.

Horizon's Edge : 200000 Gold - 277 Attack - A cutlass of legends, depicted in mythology as an almighty blade used by a great hero. With its bright orange color and yellow trail, this sword is not only the most powerful sword, but also the most powerful weapon in the Caribbean.

Nightfall Pistol : 200000 Gold - 176 Attack - A pistol of legends, used by pirates and bandits in ancient times. Colored an eerie dark black, it is the most powerful pistol in the Caribbean.

Ocean's Force : 200000 Gold - 195 Attack - A mythical dagger, used by the most renowned gladiators in ancient times. Tinted a light blue, it is the most powerful dagger in the Caribbean.

Salvation Staff : 200000 Gold - 122 Attack - A mystic staff, used by medics in a certain ancient civilization to instantly cure fatal wounds and disease. Tinted gold, it is the most powerful staff in the Caribbean.

Pearl Seal (Gives Wounds Immunity and increases Healing Efficiency to and from the user) Trade in 3 Pearl and 1 Moonstone.

Zoomer (HurrcheeseDa2nd) : Creating the page and coming up with some ideas for the content.

Nults McKagan : Giving Zoomer some awesome recommendations and advice for some of the page's content. Created the banner art.

Retrieved from "https://gamersfanon.fandom.com/wiki/The_Express_Shop?oldid=734315"
Community content is available under CC-BY-SA unless otherwise noted.