The following is a transcription of obscure historical documents recovered from the Library of Dreiton after the chaos of recent events. Recurring characters include our empire's very own founders. No authors are specified, and some seem incongrous to the reality of the others. They will be archived here as they are unearthed.

Note: The personalities of most characters vary wildly. More are expected to be uncovered. 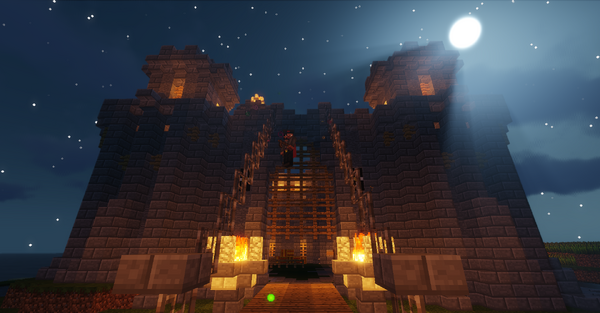 The rays of sunset beamed on the backs of the two men. With no trees, greenery, or folliage on the minuscule strip of land, they were veritable prey to the elements of the high seas. Regardless, the duo was engulfed in a heated exchange.

"I just can't for the life of me see the practical applications of this godforsaken spit of land!" bellowed one. Of the two, he seemed the more mature and civilized, albeit his stern tone of voice belied a sense of egocentrism. He was clad in lime and brown ranger's garb, with a large shimmering bow on his back.

"SPIT?!?! Well, it's not about size, it's how you use it that counts!" countered the younger. This one was dressed much more casually, and spoke with much less sophisticated vocabulary. He wore a deep blue t-shirt and pants, and a long cyan felt vest that ran from his shoulders to his calves. He mounted a fine katana on his back, and sported a utility belt with a dagger and assorted magical throwing knives. One would never guess he was a leader of an empire.

Unfortunately for him, his elder seemed to be in the right. The island they stood on, Milfuegos, was at best a lukewarm, haphazardly strewn puzzle of dirt, sand, and puddles. Its most striking feature was a submerged isthmus connecting it to a tiny sand atoll. Zoomer's dream to create another recreational port, complete with its own brothel, was to go unrealized.

"And how the bloody hell are we supposed to 'use' this?!?! I absolutely refuse to let you create a second hub for prostitution in Dreitonese waters!". Although hard-pressed to deny Zoomer's success in bringing the empire great wealth through debauchery, he believed the dirty affairs had to keep a certain distance from his Castle Dreiton.

Unfortunately for the seasoned statesman, the charismatic thief had a particular affinity for theatrics.

"Jeremiah... you always fail to understand my genius!" cried an overzealous Zoomer. He dramatically turned his back to Jerry and began climbing a steep hill to the sunset, the wet grass crunching under his boots. With each step, he intensified his dejected expression. Jeremiah's rejection of the Milfuegos Thot Project was like a sharp stake driven straight through the boy's chest. "It almost... makes me want to cry..."

Of course, he only wanted Jeremiah to succumb to his emotional bait. If he could guilt the guillible Lord Marshal into giving him another chance at presenting a new project for the EDTC, he may yet open his brothel! After all, Milfuegos was only his ninth attempt. The twilit sky provided the perfect backdrop for the sentimental exchange...

"You know, boy..." began Jerry as he pushed Zoomer from behind, causing him to plummet four whole blocks to a certain violent death.

"You're lucky you gave us Canine. Otherwise, I'd have fed you to that starving enderman tribe on Ramshackle. Now, what's our itinerary? And make it, like, an actual place this time, please. EDTC funds are low, and time is mon-" Jerry began to ramble, but was fortunately interrupted by Zoomer, who surprisingly did not pass into the next world from the massive fall. Only his feelings were hurt. As he brushed the mud off of his once-pristine vest, he interjected: "Ok, old man, I got a real surprise for you this time! We're going an ocean way!"

Jeremiah's eyes lit up. If there was one thing Jeremiah loved more than money, it was bourgeoisie alcoholic beverages. And if there was one thing he loved more than that, it was travelling! He was worldly man, as the world's finest colonial manager should be. On the other hand, Zoomer knew he had secured attempt number ten. All he needed was a little change in tactics!

"Early reconnaissance scans of the oceans surrounding our continent shows an abnormally large landmass in the Furnic Straits west of our heartland. It's surrounded by geographically fortitied barrier islands up close, and by beautiful, secluded isles afar! The catch? It's a total treasure trove of spruce lumber and diverse fauna!" explained the eager boy, while mustering as much professionalism as he could. Even so, he made sure to tease the older man's sense of greed!

"Yes, yes, tell me more!" Jerry was hooked like a child on candy! However, Zoomer had exhausted his deck, and no strong playing cards remained. Unless...

"Well, the waters are said to be haunted! Festering with creepers, spiders, ghosts, and all sorts of creepy crawlies! This voyage is meant for a man's man!" Zoomer explained. This was, of course, complete hogwash. However, challenging the politician was Zoomer's coup de grace - a surefire way to manipulate him into his bidding!

Jeremiah, of course, was the epitome of masculinty.

So naturally, upon hearing Zoomer's story, he giddily skipped towards their docked vessel like a little girl. It was a sight for sore eyes, one he wished his hibernating friends could see. It would be his own pleasure for now.

Jerry sat himself on the passenger's seat of the HMS Tuna as Zoomer jogged after him. Dusk was giving way to night, and the thief moved with a quickened pace at the thought of cold, dark waters. He took his seat on the sailor's side of the shoddy dark oak boat. Its delicate frame had been tested by repeated crashes onto the beaches of lackluster lands, Milfuegos included. However, emerald nuggets were far too scarce to buy a nice oak boat.

"After all, what is there not to enjoy about splinters?" Zoomer wondered aloud.

The duo set off westward into the moonlit horizon, the large Taiga island Cielo as their destination. Zoomer, too, was excited, if a bit anxious. Although he had sailed farther before, he had done so alone, and not with the burden of promise. Still, the Thot Project depended on his success.

As he rowed and became absorbed in his own thoughts, Jeremiah interrupted: "Say, Zoomer, who exactly says the island is haunted? Also, who are we paying to do these reconnaisance scans? And with what money?"

Retrieved from "https://gamersfanon.fandom.com/wiki/The_Dreiton_Chronicles?oldid=757093"
Community content is available under CC-BY-SA unless otherwise noted.