The Dark Barracuda Blade is an upgraded version of the normal "Barracuda Blade". It was created by and belongs to Richard Ghostvane. The sword hae the same abilities as the regular to some extent, but they're enhanced. It features a devastating dark bladestorm which can at times even operate long ranged. (This was possible in screenshots due to major game delay )

It also features an enhanced Lightning-charged strike which can at times terminate an enemy instantly.

Another ability this blade possesses is Dark Voodoo. Though energy-draining, this magic is one of the few things that can stand a chance against Bill Plunderbones or Hermit 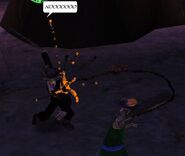 The Dark magic is seen destroying Parax
Add a photo to this gallery
Retrieved from "https://gamersfanon.fandom.com/wiki/The_Dark_Barracuda_Blade?oldid=719317"
Community content is available under CC-BY-SA unless otherwise noted.