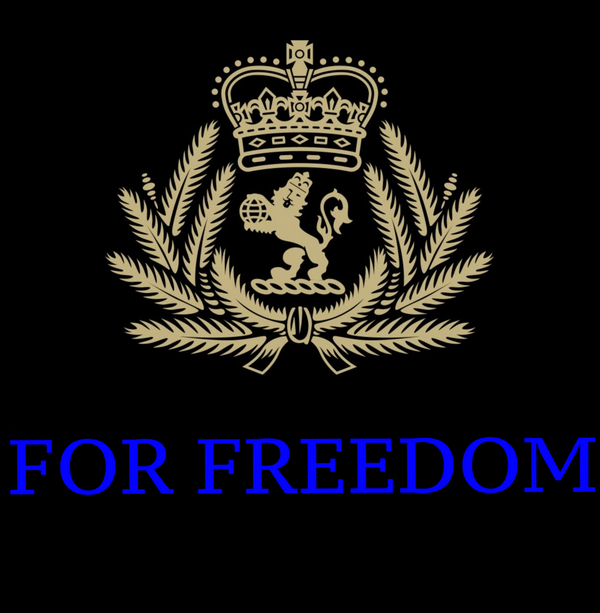 The Constitutional Republic of Mallandia, or Patriotic Business Zone, is a gargantuan, efficient, environmentally stunning and economically powerful nation, ruled by President Andrew Mallace with a fair hand. It is remarkable for its anti-smoking policies, national health service, and ubiquitous missile silos. The compassionate, hard-working, democratic, intelligent population of almost 14 billion Mallandians enjoy a sensible mix of personal and economic freedoms, while the political process is open and the people's right to vote held sacrosanct.

The medium-sized, outspoken government juggles the competing demands of Defense, Industry, and Law & Order. It meets to discuss matters of state in the capital city of Vicadal. Citizens pay a flat income tax of 32.7%.

The frighteningly efficient Mallandian economy, worth a remarkable 1,255 trillion Mallors a year, is fairly diversified and led by the Tourism industry, with major contributions from Information Technology, Book Publishing, and Arms Manufacturing. Average income is an impressive 127,732 Mallors, but there is a significant disparity between incomes, with the richest 10% of citizens earning 403,716 per year while the poor average 30,856, a ratio of 13.1 to 1.

Crime is totally unknown, thanks to the all-pervasive police force and progressive social policies in education and welfare. Mallandia's national animal is the Mallacrat, which frolics freely in the nation's many lush forests.

Mallandia is ranked globally and regionally in many sectors. View Mallandia on the Nationstates website here. 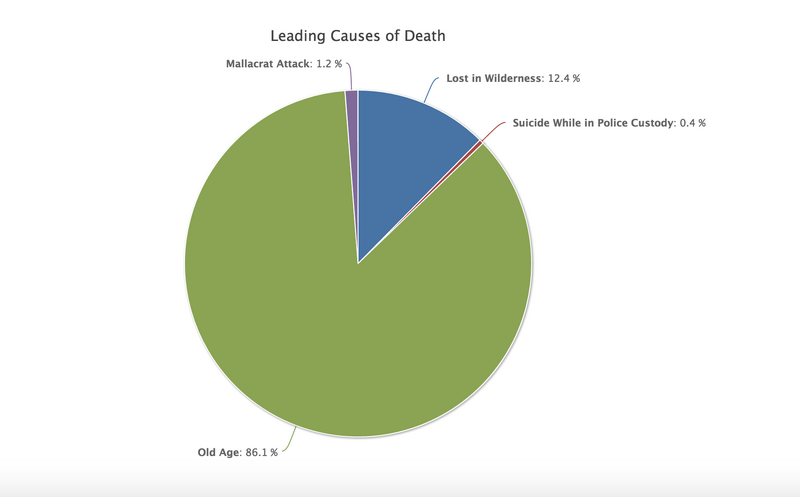 Mallandia is renowned for its functional, national health service. As displayed above, old age continues to top charts as the leading cause of death. Thanks to a new initiative and specialized police training, murder and crime have nearly virtually erased from the board. Crime is at an all-time low.  Capital punishment is still currently legal, but extremely rare. Nuclear defenses are in place, due to a new national security policy, but Mallandia's leading healthcare facilities have eliminated exposure to 0. The Mallacrat's freedom comes at a very small cost, and the rest are minimal infringes on the near perfect causes of death. 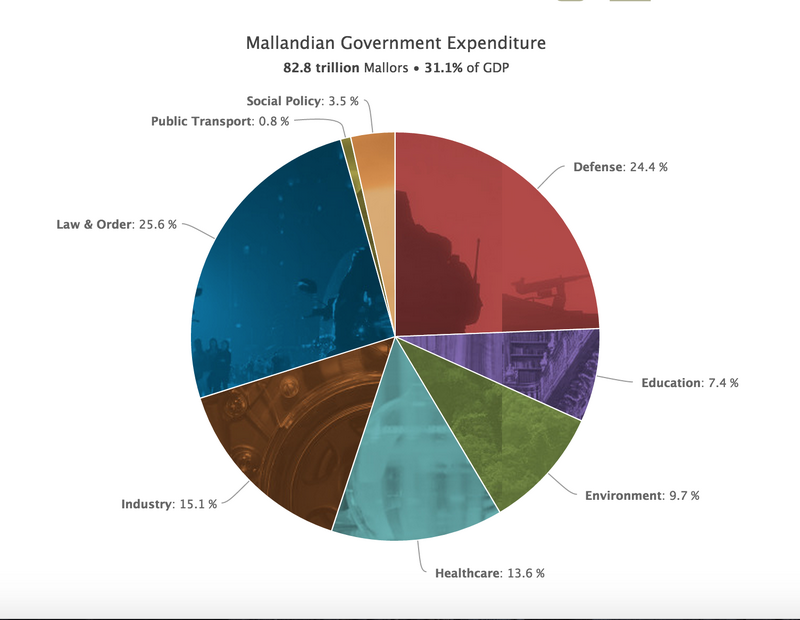 The Government of Mallandia heavily believes in a strong balance to maintain economic prosperity while keeping our citizens safe. Police and investigative forces currently receive the most funding, with commerce coming in a close second. While crime is at an all-time low, maintaining that statistic is key. Safety will never not be number one in Mallandia.

Defense spending has recently gone through the roof in a ground-roots effort to boost national security and offensive capabilities. In addition, a new space exploration program has been funded to secure Mallandian dominance in the air, sea, ground, and above. Receiving the second most funding, Mallandia now boasts the **largest** military in the entire region. (along with the biggest GDP!)Defense funding includes aids to allies. Mallandia's air force continues to dominate GFW skies with the most advancement weaponry.

Mallandia is famous for its specialized, globally-leading efficient economy. Generating revenue for a high quality life is now standard for all Malladians. The country is prided on its business savvy leadership, as well as being the key economic diplomat for Andaba. It is currently the most economically dominant and powerful nation through all its competitors.

Healthcare comes next, as the safety, security and health of all Mallandians is a key priority. With our public healthcare system, citizens receive completely free access to the nation's top doctors all across Mallandia. We now boast one the highest lifespans in the region thanks to a combined effort from congress and President Mallace's Health initiative of late 2014.

Education recieves a massive amount of the budget, as we strongly believe the children are the future. All students are required to be fluent in at least 5 languages, as training the next generation is something the Administration holds dear, to both persuade away from crime, and creating the soon-to-be brilliant entrepreneurs and economic power-heads for the country's next generation.

Of course, as we all share this planet, the environment must receive funding. Eco-friendly policies are nothing new to Mallandia. We have combined a powerful industry with world-leading efficient non-polluting economy to create a safe, beautiful and happy next generation. Its no wonder Mallandia is a key tourist destination and one of the least-toxic prettiest places on the planet.

Public transport is necessary to deliver all of our hard workers where they need to go, and receives a hefty bunch of the budget. Mallandia prides itself on environmentally friendly modes of transport thanks to the administrations promise to keep it green.

The rest of the discretionary budget is reserved for policy funding and emergency procedures, as well as day-to-day life in political Vicadal matters. 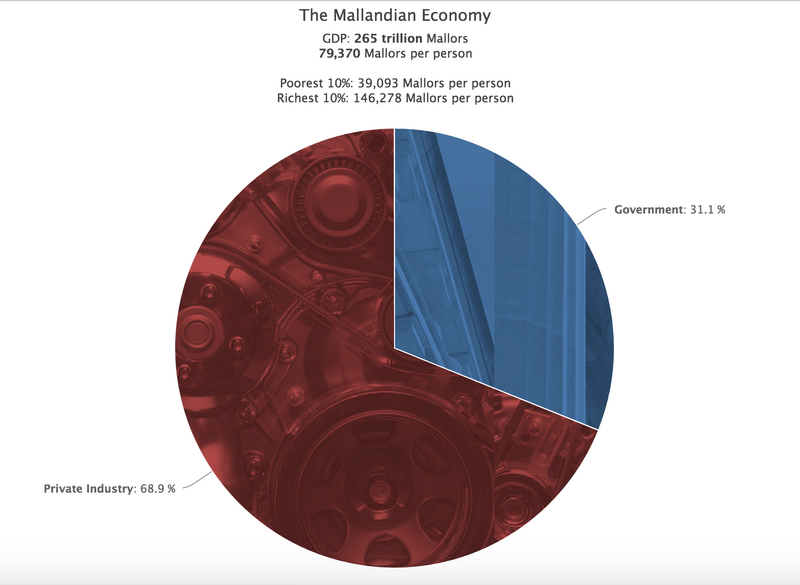 Mallandia is a capitalist nation by heart. Through the last few years, the public sector and private have battled for the 50 percentage margin. Before the health reform of last year, the private industry dominated around 80 percent of the economy. The initiative un-intendedly exposed scams and capitalist rule-breakers, which prompted an almost year-long public sector dominance as laws were rewritten, justice delivered, and ideals re-thought.

Now, following the most recent economic policy, the private sector is back, as citizens like it most. The GDP is at an all-time high, unemployment at an all time low, AND the nation is free from inflationary pressure. Things are capitalist and the going perfectly. The economy continues to be the pride and joy of Mallandia, in addition to its ideals of freedom and democracy for all.

The tax rate remains nearly flat at roughly 40.0%, a luxury almost every citizen enjoys. Low but still government-aiding, the ability to keep the nation capitalist and rich is perfect in the eyes of all. With worker enthusiasm beyond 100 percent, the specialized business methods and economic dominance are displayed and prided upon. Foreign as well as domestic investors have no fear and are hungry to get a spot in Mallandia's economy, as demonstrated by the unbelievable 105 percent in consumer confidence. Mallandia truly is the most economically power nation.

As you can see, the economy was not always in top notch shape. However, Mallandia is known for its solid economic and specialized business procedures. It has grown to become the most economically power nation in the entire region.

Political freedoms are held sacred above all in Mallandia, and democracy will always come first. The right to vote and the ideals of democracy are the foundation of the entire nation.

Civil rights are given, but citizens realize that sometimes, safety must come first. It is a natural balance that keeps things, in the words of the administration, "freely- brilliant."

Mallandia long resided in the region of GFW (Andaba) as the Founder and renowned Commander-in-Chief. The region was stabilized and continued to hold monthly elections for the delegate,  while maintaining its status as an economic, free paradise.

The Meme Must Go on

Mallandia is currently the World Assembly delegate for the region co-founded with Edgelandia, The Meme Must Go On.

Retrieved from "https://gamersfanon.fandom.com/wiki/The_Constitutional_Republic_of_Mallandia?oldid=758139"
Community content is available under CC-BY-SA unless otherwise noted.