The Battle of Telltale HQ was when Ryan Blademonk attacked the Telltale HQ on 4/4/2011 this battle lasted several hours (days) when Ryan Blademonk called the order: "I think they had enough men, RETREAT!!!!" THe EITC left while being shot at and defeated. Eventually a bunch of noobs in random guilds said they were EITC and everyone just left.

There were two main leaders of the pirates in the war: Simon Treasurehawk and Nicholas Nikolia

The EITC Leader of the war was: Ryan Blademonk.

Here are a few documentations of the war: 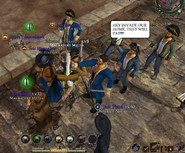 A scene of the fight

Add a photo to this gallery
Retrieved from "https://gamersfanon.fandom.com/wiki/The_Battle_of_Telltale_HQ?oldid=693573"
Community content is available under CC-BY-SA unless otherwise noted.