History Of the Sword.

The sword was crafted by some of the greatest blacksmiths in 1679. It was wielded By the legendary Capitaine Guirlande, a famous Sailor of the 1600s. But the sword was lost when the captains ship (The Revenche Perdo) hit rough weather of the coast of Florida. The captain was on deck when the storm hit, And when the storm hit it hit hard and fast. A few minutes into the storm a large wave swept across the deck taking everyone with it including the sword. 30 minutes later the ship and what was left of the crew plunged into the sea, there were only 3 survivors, all claimed of seeing a ship captained by Davy Jones, the story was brushed off by authorities do to poor seeing conditions during the storm.

In 1744 (Current year in game) a sword identical to the legendary sword was found in a box on Isla Tormenta, By a Spanish explorer named Bernardo Cortez, But on his way back to Spain his ship was captured by the British ship HMS Freedom, a frigate on its way to Port Royal. When the HMS Freedom landed at Port Royal two high ranking british soldiers confiscated the sword, The captain of the Freedom saw the sword loaded onto the HMS Pereal a Ship Of The Line, But on the way back to Great Britain the Pereal was Attacked by a large vessel, Again said to be crewed by Davy Jones.

Can only be acquired at Tormenta.

The Revenche Perdo, Sinking in the storm 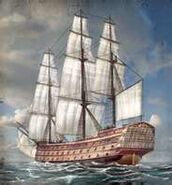 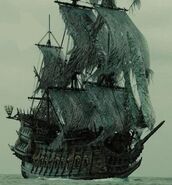 The Flying Dutchman
Add a photo to this gallery
Retrieved from "https://gamersfanon.fandom.com/wiki/Sword_of_the_Legendary_Capitaine_Guirlande?oldid=732064"
Community content is available under CC-BY-SA unless otherwise noted.