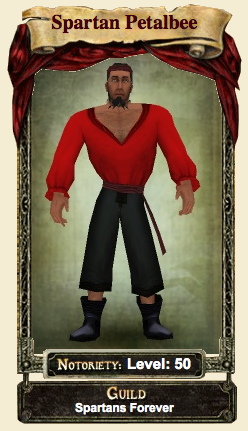 Spartan Petalbee came to power in 1658 after the death of his father, Alfonso Clemente Petalbee. Spartan is notably famous for uniting Spain together, and vastly expanding its borders into Italy, and Northern and Central Europe. Petalbee also founded the notorious "Spartans Savvy" guild which eventually transformed into several chains of guilds throughout Spain. Spartan brought Spain into its first true Golden Age, but when extreme economic depression hit Spain in the late 1690's, revolutionaries began demanding reforms, and some even demanded independence. Petalbee's refusal to acknowledge these issues would lead to him being overthrown in 1701.

Petalbee was presumed dead after the battle of Leon in 1701, however, he managed to escape to Portugal, and then to Northern Africa. From here, he ventured farther South and remained in exile until 1742, when one of Clemente's spies reported him to be in hiding. Clemente recalled Petalbee back to Spain and gave him amnesty and allowed him to live in Valencia, Espana has a privileged citizen of The Spanish Empire.

Retrieved from "https://gamersfanon.fandom.com/wiki/Spartan_Petalbee?oldid=736780"
Community content is available under CC-BY-SA unless otherwise noted.