Slake is a dagger in the group of Master Ex.

This dagger was made by the victorious, King Shadow Sail about 2 and a half years ago in his very own 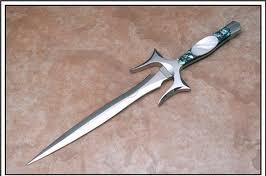 cabin. No one else helped, not Jack Daggermenace, not Slint, no one, it was a solo job. Shadow wanted this to be a secret, he knew it would cause nothing but trouble if word got out, thus, he kept it to himself. He made it with the finest and most expensive materials, as he did with Sea. It took him 1 year to build and 1 years pay, which means a huge amount. The same amount and time as it took to build Sea. When he was done making it, he knew there has to be a solution to protect it, to keep it hidden, to keep it a secret. So he created many secret underground passages, only he knew the path to the dagger. He hired the best security a pirate could buy. He got 20 guards just for the entrance and 100 guards for the inside of the passages. All of these guards were very skilled and powerful, only Shadow, Jack and Slint could defeat them, Shadow made sure of it. He told the guards that he was hiding gold, he didn't want them to know about his real treasure he was hiding from the eyes of all pirates. The passages were so confusing, so complex, so heavily guarded, Shadow was sure no one could get a glimpse of the dagger.

Shadow trusted very few of his guards. He was very particular with who he trusted. He didn't trust many people, he even didn't trust some of his friends and if you lost his trust, you couldn't earn it back. That is why this next event surprised many pirates.

It was a cold, dark night at the entrance of the passages leading to the dagger. It was Shadow, and about 10 guards, the rest were off, it was the middle of the night, like everyone, they needed sleep too. He was chatting with them, talking about ships and such, when Shadow noticed, he may be able to trust one of the guards, Gorden Gollins. He made the conclusion of letting him in on his little secret dagger. He brought him back to the sacred room and showed him what he was really hiding. It was the worst mistake Shadow had ever made in his whole life.

The next day, Captain Shadow noticed a stand, a stand with Gordon behind it. He was charging people for the knowledge of what was really being hidden. As soon as Shadow realized what was happening, he sent Gorden to jail, for life, but it was too late, everyone knew about the famous dagger, and they all wanted it.

Now of course, everyone including Jack Daggermenace and Slint, the other works in Master Ex, and they weren't too happy about it. They felt betrayed, angry, etc, for the simple reason that Shadow had not told them, for they were very good friends of his. Shadow tried to explain that it would just cause madness, and trouble, but they wouldn't listen. Soon a riot had started within the town. The guards could control them from not getting in the cave, but Shadow couldn't persuade them to stop being mad at him. He didn't get any sleep for the next week or so, everyone was against him. He didn't know what to do, he didn't know what to say, so he just sat there, in his cabin, with sadness.

Shadow knew he couldn't let this keep going and going and let it turn everyone against each other, which was starting to happen, so he came up with a plan. He called yet another town meeting. He tried yet again to persuade them to not me mad at him, and of course, that failed miserably. He was sure to point out there was only one copy of the dagger. He was lying.

With sadness, after the town meeting, he made his way to the sacred room inside of the cave. He opened the skull chest, and there they were, the two finest daggers ever to be made. He took one, and exited the cave. He called his guards over and told them to come with him for another town meeting, to protect him, and the dagger of course. They obeyed and followed him to the meeting hall on Tortuga. Shadow said hello to everyone, then got right to the point. He lifted the dagger from his pocket and showed it to the giant audience. They starred at it, in complete shock, not knowing what to make of it. Shadow then told the guards to make a fire in the nearby fireplace. He also told one guard, secretly, to pour a special potion, called Hidro Oxide into the fire, this potion let the fire destroy everything it touch, but only Shadow knew that. The guard obeyed and poured it in the fire. Shadow raised the dagger high and proud, then threw it with force into the fire, it burned up instantly.

Today the dagger is well hidden, in Shadow's possession, only Shadow, Jack and Slint know about it. It is kept very safe, only used on rare occasions and currently, the most powerful, and valuable dagger ever known.

Retrieved from "https://gamersfanon.fandom.com/wiki/Slake?oldid=704518"
Community content is available under CC-BY-SA unless otherwise noted.