Start a Wiki
Silver Shadow Striker is a blunderbuss made by King Shadow Sail and is in the group Master Ex. 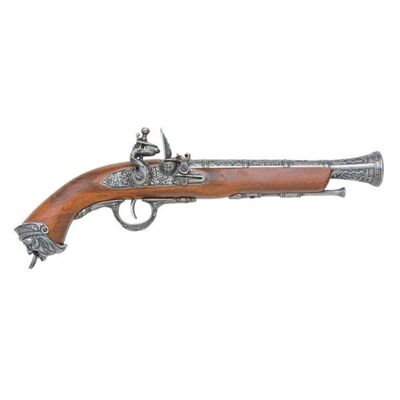 This pistol was made by Shadow about one year ago, making it very new to the Master Ex group. The gun was used in the war against Jolly Roger in 1225.

Shadow and his team he was leading was loosing to Jolly's army. About 1/2 of Shadow's team was already dead, only the most skilled were left to fight. Jolly was killing Shadow's closest friends, and yes, even some of his family that was fighting. It made him sick. Even Captain Shadow, with his very powerful weapons, had no idea what so ever to do, the future did not look good for him.

One night, Shadow returned to base, depressed yet again. He had lost yet another friend, named Johny Darksilver. Shadow quoted,

"Aye, he was a great man and put up a fight. I just wish he can still be here to accept the honor of fighting in the war."

And that kill just did it. Shadow went on.... a rampage. He told all of the members of his team to get out and hold back his army for as long as they could, and Shadow would stay behind. The team, some sleeping, got up as he did as they were told, all of them. Jolly looked dumbfounded, then shook himself out of it and called his army. He had a skeleton army of over 100, Shadow's army just around 35. Only Jolly's kept coming back, there was no getting rid of them. Out of the 34 that were out on the battlefield, 12 had died within 50 minutes. Most members were only thinking one thing, Where was Shadow?

Shadow had lead them through most of the war, only some knew what to do without them. Only 5 of Shadow's members were left now. 4, 3, and boom, Shadow came bursting through the door of his house and ran out onto the battfield. Within 30 seconds, everyone on Jolly's team was dead, for good.

Today there are two left. One Shadow uses, the other hidden.

Retrieved from "https://gamersfanon.fandom.com/wiki/Silver_Shadow_Striker?oldid=696452"
Community content is available under CC-BY-SA unless otherwise noted.