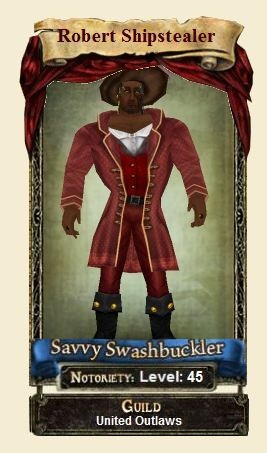 Shah Robert Shipstealer is the Shah (King) of Persia. He controlls Persia , and most middle eastern countries. Also has opened trading routes between the EITC and Persia that way Robert could expand his great empire. Robert sometimes SVS and on Tormenta to master grenade. Then he joined the EITCSI as an assassin/ guard because he is a great assassin. Rober also trained with many great assassins and is very lethal in combat. Robert spends his time on Tormenta to master weapons.

Robert Shipstealer comes from royalty of Persia ( Iraq ). His father, Shah Robert Shipstealer the 4th, died of a rare disease. Shortly of his death the brothers were to fight to see who would become Shah of their father's great empire. Robert killed off his brothers and became Shah of the Persian Empire. During his reign he had around three children. All men and they will the time is right fight for the crown. Robert also tried to expand his empire to the other sides of the world. But he didn't conquer but he did make aggreements between the middle eastern governments and then when all the middle eastern countries leaders were under Robert's control then Robert's assassins killed the other middle eastern leaders making Robert the Shah of all the Middle East with an empire huge enough to take down Europe. Then Robert wanted his empire to be expanded upon so he sent Persian Assassins all over the world to find out what areas are best to conquer. Then Robert decided to look around the world. He set out aboard the Persian Elite ( ship of the line ) to look for lands to conquer. Then he came across the Caribbean and decided to stay for a while. He then met on Isla Tormenta, Giratina Origin Forme, and he was an EITC lord. Robert liked the EITC because they could be an allly for Persia to conquer more lands. But instead he made a guild called the Hired-Gun Co. to help the EITC cause. He was EITC for a while then Giratina went missing so he left the Hired-Gun Co. and set off to piracy.

Robert moving from Persia to the Caribbean to figure out which areas are good to be conquered and what allies can be found. Then Robert met Girantina in Tormenta. He told me about the EITC and he helped Robert master three weapons. Giratina was going to invite him into the Co. Empire, at the time a strong EITC guild, but Robert refused because he had his guild from Persia, the Hired-Gun Co. Giratina then made the Eternal Mastered an EITC guild no longer in service. Robert also met up with the GM of the Co. Empire, Benjamin Macmorgan and Robert agreed to help the EITC as long as they Persia opened trading routes between the EITC and Persia. As time passed Robert didn't like the EITC's way. He didn't like to conquer the Caribbean and so he left the Hired-Gun Co. and moved to a life a piracy. His EITC lifestyle was now seperated and he left the EITC but right before he left he killed a commanding officer in the Hired-Gun Co. and was now branded a traitor to the EITC. But as he left he left destroyed many EITC ships that were following him on the way back to Persia. Robert was pursued by EITC assassins also Admiral Wilson was the one to kill Robert if found. Robert was going back to Persia but made a stop in Italy where Wilson attempted to kill him. Wilson said " Traitor to your EITC brethern, killing your own and turning your back on the EITC". Robert replied" I left because you guys tried to conquer the Caribbean. I wanted part of the land but not by killing the innocent." After a few words then Robert fought Wilson. Wilson had back up already taking over Robert's ship. Then Robert threw a smoke bomb and got away from Wilson. He got smuggled out of Italy and sailied back to Persia.

Betrayal and a trap

Robert was surrounded and saw that he had no where to go but he had a plan. He allowed them to take him into custody. They didn't even give him a trial they already put him on death sentence. He was to die within the week. In jail he met Francis Beckett there. Francis was apparently an EITC lord and Beckett's son. Beckett was telling him about this island that is full of villagers and easy to conquer but sadly the EITC no longer have control over the island. Robert asked why they didn't have it anymore. It didn't seem that he didn't want to talk about. Robert before his day to escape asked him where this island be. Francis told him where it is and asked why he would ask that. Robert said it was just curiosty he guessed. Francis left for trial but didn't come back. Then at night he proceded to escape. The night guard was to bring him food at night. Then when he was about to close the gates Robert rushed at him and killed him. When the guard was dead Robert got out of the prison and snuck out of the fort dressed as a Navy commander. After Robert left the fort he found a cargo ship heading for Tortuga so he got onboard and escaped his capture.

Since Robert was very new to the Caribbean, Tortuga was a strange place. Unlike Port Royal, Tortuga was full of rum, drunken sailors and other people.﻿

This is Robert's family crest. Also was his father's crest when he died of a rare disease. When Robert's father died then this became Robert's crest. The dragon symbolizes Persia's Force and the control over the middle east. The Orange is for the Shah's blood. The purple is for the royalty that Robert has in Persia.

Retrieved from "https://gamersfanon.fandom.com/wiki/Shah_Robert_Shipstealer_V_of_Persia?oldid=707865"
Community content is available under CC-BY-SA unless otherwise noted.