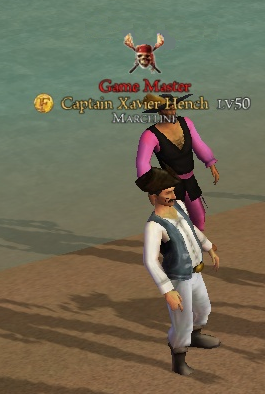 Host Game Masters of Pirates Online where giving away famed weapons to unlimited access people. This event has lasted from Friday, November 23 though Sunday November 25. The people with basic access and have met the game masters were given crude weapons like rusty cutlass, crude sabers and pistols.

A lucky pirate was very lucky to get these famed weapons. We won't say the pirates name but she got a Seven Seas Repeater and a Assassin's Throwing Knives. The GM that gave her those weapons was the Guild Master of Marcline guiild Captain Xavir Hench. The pirate thanked him and called him "Santa" because she felt it was like Christmas all over again.

Retrieved from "https://gamersfanon.fandom.com/wiki/Seven_Seas_Chronicles?oldid=702038"
Community content is available under CC-BY-SA unless otherwise noted.