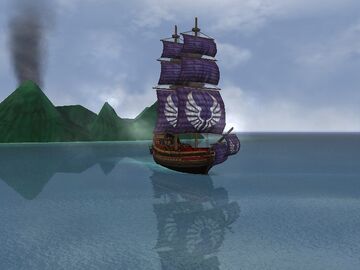 The Sea Phoenix is an War Brig used by Kat Bluebonnet to do anything she wants.This ship is great for plunder runs since it has so many cannons. Kat decided to get purple sails with a wing type emblem for the ship. The ship was named after Kat's Light Galleon ,Galleon and War Galleon. Kat also named this ship after a phoenix because they are epic birds. A bird that lives for 500–1000 years but it dies by burning itself. After the bird "dies", it comes back as a baby bird again. This ship used to be a War Galleon until the Brigs came out.

Retrieved from "https://gamersfanon.fandom.com/wiki/Sea_Phoenix?oldid=756311"
Community content is available under CC-BY-SA unless otherwise noted.