Sea is actually a broadsword (though, thanks to the ability, Ex Weapon Belt, can be changed into any weapon, including staff and such) made by the famous Master Ex group.

This blade was made by Captain Shadow Sail about 20 years ago. A pretty old broadsword. It was made with 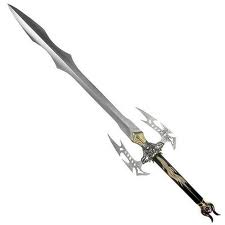 the finest materials and took over a year just to get the materials. Shadow gave a whole years worth pay, which means a lot, to pay for this masterpiece. Its name is Sea. He gave it that name because Shadow Sail was out at sea while thinking about the planning of the cutlass and some how, the sea influenced Shadow with the planning of the Broadsword. It was all great and all, the blade was kept safe, under protection, everyone was happy, until one day something happened them would change the life of all.

This broadsword had a bit of scary past, leaving Shadow with the thought of possibly burning the broadsword. Once word got out about this new broadsword, people went nuts Banging at the doors of both, Jack Daggermenace and Shadow, starting riots etc. It was a horrid action, but people wanted what they wanted. Jack and Shadow hired body guards, that helped a bit, but not a lot at all.

One evening, Shadow was transporting both copies of the blade, at night, to another secret safe, where no one would know where it was. It was usually peaceful at night, but this night happened to be different. El Patron seemed to be visiting the area for some odd reason. Rumor was he found out about Sea. Shadow had no idea about El Patron at the time, didn't even know who he was. Next thing Shadow knew, there was Shadows surrounding him. One of the guards slapped their hand on little Shadow's face, and that was all. When Shadow could see again, they were gone, with both copies of Sea.

Captain, along with Slint and Jack had not one idea about what to do. Someone, at this point they didn't know who yet, has gone off with the worlds most powerful weapon. They were scared, mad, and worried. Captain, remember, at the time he was only 14, decided to hold a town meeting. He explained to everyone that Sea had been stolen. The crowd was not happy and wanted it stop just as much as Shadow. They needed and wanted to find out who stole the weapon and fast. There were already reports of large amounts of Pirates dying. And with that, they had their first clue: This person didn't like pirates.

It is now the most powerful blade ever known.

This broadsword has some very unique abilities.

Retrieved from "https://gamersfanon.fandom.com/wiki/Sea?oldid=696767"
Community content is available under CC-BY-SA unless otherwise noted.