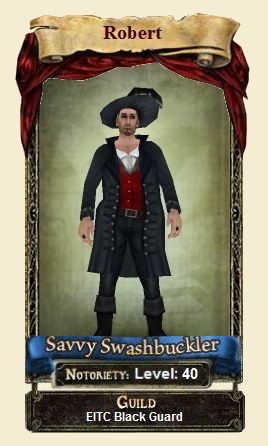 Born in the Carribean to a British family that wasn't the richest but not the poorest. Then as he progesses throughout he made money gambling and then finally made enough money to study but that got boring fast. He left but then joined Lord Giratina Origin Forme's guild the Eternal Masters, an EITC guild. He likes the EITC's way and then became an EITC member. Then as he made money he met very powerful members of the Navy and EITC. Then he opened the EITCSI as president and now runs a huge part of the EITC. On June, 10 ,1740 Robert resigned from his post of President but he'll always be involved with the EITCSI.

Retrieved from "https://gamersfanon.fandom.com/wiki/Robert?oldid=158325"
Community content is available under CC-BY-SA unless otherwise noted.