This is my second pirate of User:Captain Robert. Older brother of Robert Macmonger. Robert is also the High lord of the Co. Alliance Government. Also he is the Trade Ship Captain of the International Trading Bank. 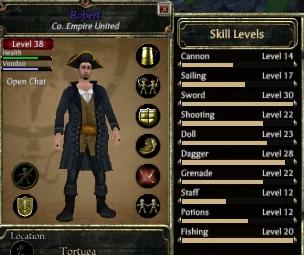 Robert has now been turned to the EITC and the Royal Navy. Robert is now on the lookout for EITC or Royal Navy Guilds. Robert Macmonger, little brother, has now angry with his older brother for turning on his pirates friends. Robert is currently the High Lord of the Co. Alliance Government and The Trade Ship Captain of the International Trading Bank.﻿

Retrieved from "https://gamersfanon.fandom.com/wiki/Robert?oldid=67654"
Community content is available under CC-BY-SA unless otherwise noted.