Rat Legions is a guild created by Ratty Lord O'Rat himself, who is the Guildmaster. All Rats are meant to look a bit like creepish old farmers. Several other Ratty Officers of the High Rat Council do include, but are not limited to:

The main activities this guild takes in are trolling. Yes, that's right. We find people on Abassa or anywhere else, say strange things, and troll them. Rats are commonly found wearing the following:

Nothing else; meaning: that is all they wear.

If you're lucky, though, you may catch them in the middle of one of their rat rituals. During said rituals, they often wear their fancy clothes: 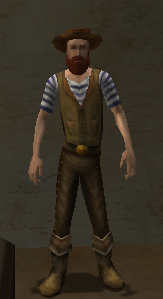 A rat adorning his ceremonial dress.

This is their theme song. It is a parody of Sexy and I Know it.

(Pigs approach, and O'Rat is walking in fields with a Geezer Gun.)

When I walk in the fields, this is what the cows see: (okay) an old dirty man with a musket on his knee. Got my Geezer Gun in my belt and I ain't scared to use, u- use it, u- use it!

(Pig is seen charging and O'Rat shoots it in between the eyes and walks on by.)

I'm ratty and I know it.

This how I roll, straw farmer hat, out of control! Agh!

(O'Rat is seen blowing out his back in the background.)

When I'm on my ship, I fell right down 'cause I broke my hip! Agh!

I'm ratty and I know it.

A code will be added soon, so until then ask either High Rat Lord Mcrat, Ratty Overlord O'Rat, or Raging Rat General.

If you want to join, you must have your starting items be the following:

You also must make him very pale, with the skinniest body type, the most pale skin-tone there is, have red, balding hair, and a big beard. Your name must also end with or contain in some way or form "Rat". A screenshot of a Rat will be shown below shortly.

If you want to take part in Fancy-Rat Rituals, you must buy the aforementioned outfit (using the gold codes "bounty" and "loot" if you are joining on a noob, which I would recommend).

"It's us Rats against the world, so take no refuge!"

If you have any suggestions or would like to join, please ask in the comments, in Chat, or on the talk pages of the aforementioned people. Ra-ta-ta!

Retrieved from "https://gamersfanon.fandom.com/wiki/Rat_Legions?oldid=707778"
Community content is available under CC-BY-SA unless otherwise noted.