Many years ago, Silus Mann found a way to raise the dead. He ruled the world, until Calypso destroyed him and his powers. He found his way out of the afterlife centuries later, and returned to the Caribbean as a terrifying Undead Reaper, known as Pyro. He haunts Raven's Cove only at night, spawning in the same spot all the time, back in the alley behind Senor Fantifico's buildings. He is a level 92 Boss with 500,000 health, only challenged by the bravest of Pirates. 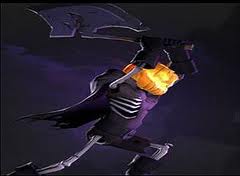 Summon Undead - Pyro summons a horde of Undead Raiders to assist him.

Soul Storm - Pyro summons a thousand souls to attack nearby pirates with a punishing force. (1,000 damage).

The Haunted Axe of Silus Mann

Retrieved from "https://gamersfanon.fandom.com/wiki/Pyro?oldid=728081"
Community content is available under CC-BY-SA unless otherwise noted.