Start a Wiki
Prince Leon, Formerly known as Captain Leon, and Lord Leon, was a guild founder and military leader. During his life, Leon was Lord Marshal of the East India Trading Company, and Oceanic Lord of the Royal Navy under King George II, his cousin. Lord Leon is one of the most infamous, well-known men, who ever sailed the Seven Seas.

Captain Leon first appeared as a soldier (third in command of his guild) under Benjamin Macmorgan, the Lord Marshal of the East India Trading Company, at the time. He quickly rose through the ranks using his political cunningness and soon became one of Macmorgan's most trusted men. Leon quickly worked his way up in the EITC, becoming one of the most successful leader's in the companys history. Lord Leon's rule was one of the most controversial in the history of the leaders of the Company. Due to conflict within the company regarding Leon's recklessness, he was formally discharged. Lord Samuel Redbeard, who so desperately wanted to become the next leader of the EITC, had his chance to pursue the coveted position when Leon was fired. Leon disappeared after his exile from the EITC. Although, shortly after Captain Leon came back, under the control of Pearson Wright, where he became a brilliant military commander and third in command. Using his army, he took the throne of Spain for a very short time, before being forced into exile yet again, due to recklessness.  Captain Leon (now known as Prince Leon) soon returned to the Caribbean, only to claim he was in the EITC once again. He is regarded now, as not a lord or a prince, but a power-hungry fiend who is both harsh and narcassistic.

People who served him; this is not the complete list 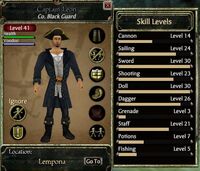 Guilds made by Captain Leon

Leon was scheduled to appear in in The Logan Family Story, but was cut out as on Facebook, some people were hating the story for the way it made the EITC look.

Leon is scheduled to appear in Logan Family Story 2. This time he is goning to appear and in all the chapters he phisically appears in, his name is included. e.g "The denited promotion of Leon Goldtimbers"

Retrieved from "https://gamersfanon.fandom.com/wiki/Prince_Leon?oldid=704780"
Community content is available under CC-BY-SA unless otherwise noted.