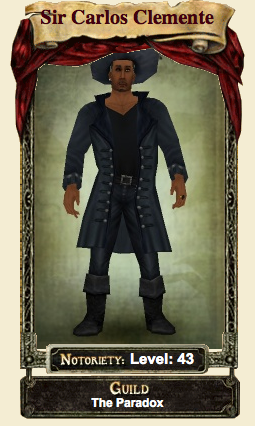 Philip V Clemente was born on the 10th of February in the year 1674 in Cordoba, España to Spartan and Pearl Petalbee. Clemente is the eldest of 7; Samuel Creststeel, Hannibal Clemente, Elizabeth Bane, Jack Darksteel/Captain John Fatbeard, Carlos La Verde Sanita, and Jade Stormfury. Clemente's childhood was wrecked by war and political rivalry. Fearful for her children, Clemente's mother, sent all her children away to different locations until the power disputes were settled. Philip and Samuel were sent to Cuba. Hannibal was sent to Morocco. Jack and Johnny were sent to France. Carlos was sent to Sicily, and Elizabeth to Ireland.

Clemente remained in Cuba from 1681 - 1692. During this time, Phillipe and Creststeel lived as peasants, with little rememberance of their true heritage. In 1683, The "EITC" under Lord Benjamin Macmorgan invaded Cuba and burnt Phillip's village to the ground. Thousands of innocent Spaniards were massacred. Fortunately, both Philip and Creststeel escaped into the forests of the heart of Cuba. Despite what had happened, Clemente gained a great interest in this man, "Benjamin Macmorgan" as well as The EITC. He was curious to what their intentions were, and he was also somewhat interested in joining this "EITC". Creststeel on the other hand, was in complete disagreeance, and in April of 1683, at only 9 years of age, the two went seperate ways.

Creststeel fled to The Yucatan Peninsula far away from The EITC's port of call, whereas Clemente thought that it'd be wisest to go as close to the EITC as possible, to find out what they were all about, and what their true intentions were. In 1685, at age 11, Clemente was captured by a man named "David Bladekidd", a lord of The EITC. At first, Clemente was startled and horrified, but once his blindfolds were removed, and he was awoken inside of Bladekidd's Mansion on Port Royal, Bladekidd explained everything to him.

Phillipe's father had dispatched Bladekidd years ago as a Spanish spy. Bladekidd had carefully risen through the chain of command and was now tasked with training Phillipe into an aspiring commander, to one day succeed his father as the king of Spain. Phillipe was appalled at first, but also curious. Bladekidd personally trained Pearson in the arts of the sword until he reached the age of 13. By now, Bladekidd felt that Clemente was ready to take on his first mission as a "young commander". Bladekidd handed him a handfull of militia, and ordered Clemente to ambush Macmorgan's troops on the eve of November 17th, 1687. This was the first official act of war that Clemente ever committed. Clemente's ambush proved to be a colossal failure. His men were slaughtered. He however, did manage to escape back into the forests.

Days later, he was once again "captured" by Lord David Bladekidd. Bladekidd now understood that Clemente simply needed more training and experience before he took on the most powerful man in The Caribbean at the young age of 13. Clemente did not return to combat until 1690, at the age of 16. Clemente led a large militia force against Macmorgan's forward army in open combat on January 8th, 1690. Although heavily outnumbered and outmatched, Clemente managed to push Macmorgan's forces out of Port Royal and into the country-side. Fearing imprisonment, several of Macmorgan's men betrayed him, and joined Clemente's cause. By May of 1691, Macmorgan had been all but obliterated, and Clemente had liberated the Caribbean of The EITC's tyrannical ambitions!

Shortly after this, Clemente received a letter from Bladekidd who had now re-located himself in Spain. It asked for Clemente to return immediately, to establish himself there. Bladekidd emphasized that several cracks were becoming visible in Petalbee's government, and that he saw the potential for Clemente to gain power there. Enticed by the opportunities awaiting him in Spain, Clemente gathered the best of his men, and united them into a force known as the "Caribbean Rangers", and for the first time in over 10 years, returned home.

Retrieved from "https://gamersfanon.fandom.com/wiki/Philip_%22Pearson_Wright%22_Clemente?oldid=711367"
Community content is available under CC-BY-SA unless otherwise noted.