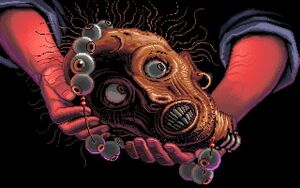 The Necklace of Vision is a necklace owned by Richard Cannonwalker. It was given to Richard by his adoptive father during their last visit together, after Richard was jailed in England for his first charge of piracy.

Although it is usually referred to only as a necklace, it is usually accompanied by the salt-preserved head of a Royal Navy Officer. Sometimes, the head is left behind and only the necklace itself is taken around, though the presence of the head is customary.

It is unknown exactly how the necklace was created. It was presumably created by Richard's adoptive grandfather, although the means by which it was created are unknown.

After being imprisoned in England due to affiliation with a pirate ship along the Barbary Coast, Richard Cannonwalker was visited in prison by his parents. His father told him how ashamed the two of them were for Richard leading a life of piracy, the very thing they moved away from the Caribbean to avoid. Nonetheless, Richard's father passed, on to him, the necklace. His father claimed it was a charm to help him succeed in his piracy. Additionally, Richard's father also said this would be the last time the three would ever meet together. Surely enough, Richard never saw his parents again after that day.

The necklace was created with immense voodoo power.

Although the necklace has great power, it also has repercussions.

Retrieved from "https://gamersfanon.fandom.com/wiki/Necklace_of_Vision?oldid=707337"
Community content is available under CC-BY-SA unless otherwise noted.