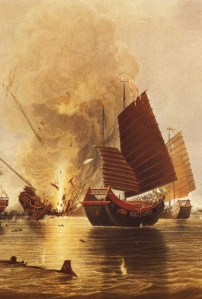 The Cougar is a class of war junk in the service of the Royal Navy. This vessel carries 9 deck cannons and 14 broadside cannons on each side.

In addition to traditional ammunition, they fire with firebrands and explosives. They are often found on the far side of Port Royal, near Kingshead, or near Isla Cangrejos, or helping a treasure fleet. There are only a few present at a time, but they may appear from randomly.

Retrieved from "https://gamersfanon.fandom.com/wiki/Navy_Cougar?oldid=752581"
Community content is available under CC-BY-SA unless otherwise noted.