Start a Wiki
The Order 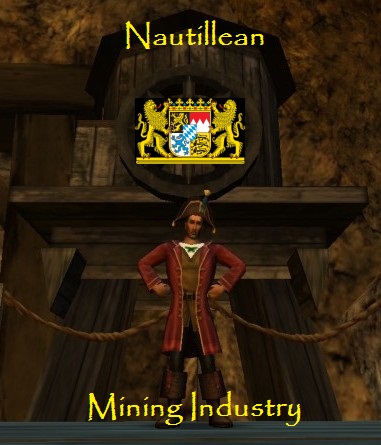 The Nautillean Mining Industry is an industry owned and operated by The Order of Nautillus. The industry mines resources such as gold, silver, iron and other precious metals and resources for use by the guild. The resources are either used for trading, crafting weapons for the guild or other more practical uses like construction.

The industry is funded by trade income, spoils of war, internal investments and foreign investments. The wealth generated by the mines go towards the guild coffers, the share holders in the industry and other companies that the guild invests in.

The labourers are either prisoners of war or the lower class people of the Caribbean in need of a job. They are well equipped and given good clothing as well as clothing for work and three meals a day. They are unarmed because some of them are prisoners of war and these are the less privileged of the miners. However, guards are assigned to patrol and protect the mines.

Three mines are currently owned by The Order of Nautillus all of which are in Guines. We do not believe in mining outside of our sovereignity and Fragilles is not largely populated by the Order so no mines have been set up there yet.

This mine was the first Nautillean Mine and is currently the second largest mine. It has the largest iron and steel source of all the Nautillean Mines and has caused a blacksmith to be setup nearby to process all the metals into weaponry and ammunition. 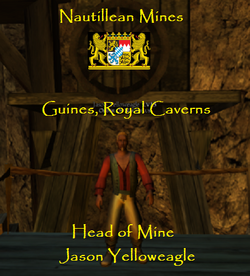 This mine was the second Nautillean Mine and is currently the largest mine. It has the largest gold and coal source of all the Nautillean Mines and a mint has been built in town to trun the gold into coins for trade. The docks of the island have also grown because if this trade. 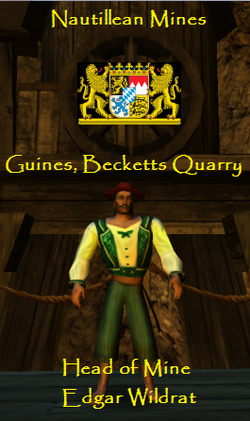 This mine was the third Nautillean Mine and is currently the smallest. It has the largest sulphur source of all the Nautillean Mines. The largest amount of prisoners of war work here because it is much harder to escape the island.

These are companies or people who are not in the guild that invest money in the business privately and recieve some form of repayment. 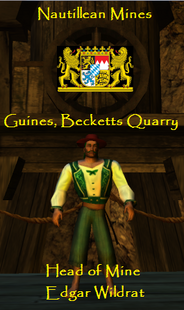 Retrieved from "https://gamersfanon.fandom.com/wiki/Nautillean_Mining_Industry?oldid=707329"
Community content is available under CC-BY-SA unless otherwise noted.