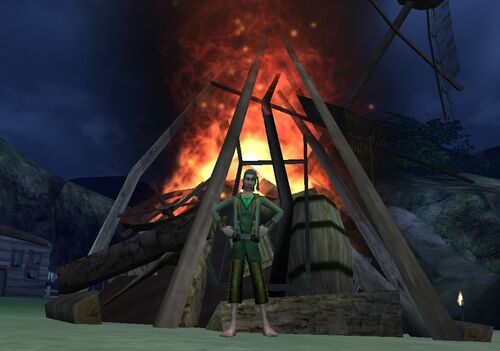 Mega always live a pirate's life. Mega was born on Raven's Cove before Jolly Roger attacked the island.He was always wanting to pvp and svs. He also loved poker and always used to play blackjack with his big brothers Von Bryant, and Charles Cortez.

One Night, Mega went fishing to catch his food for tomorrow but instead he had a encounter with 3 fishes that were way larger then usual.

Life as a jumper

At first i always wanted to know how to do pvp outside the pvp areas. So then i made a final decsion to become a jumper but there was a risk to it disney always hated jumpers, they always banned them for lame reasons. Either way i was trained by a "true" friend named "Truelifetreasure" he taught me all the basics in jumping and how to surive as a jumper also, taught me since there were not "extra" blades added to the potco world. The bad part was i was acting like a total jerk when i was a jumper and in ferbuary (the month i joined) i acted pretty harsh here on potco players, i got started here by acting a jerk because since feburary i was a jumper. Then it came to me, this amazing glitch, i founded and i started this really bad glitch it was a doll and a simple blue aura i used to "crash" people on abassa tortuga and even when there were invasions i contuined doing this multipe times i even created a guild called "Cell Guards" to crash people i lost alot of respect to alot of people....

Retrieved from "https://gamersfanon.fandom.com/wiki/Mega?oldid=747780"
Community content is available under CC-BY-SA unless otherwise noted.