McKagan Productions originally only published POTC-related fanon, but due to the allowance of new games, MKP now also publishes works about any games approved to be on the wiki.

Nults McKagan personally reviews every piece of literature requested for publication. His standards are flexible and not definite:

The game or games that the stories are related to are shown in parenthesis next to the stories' names. Note: Stories published by Cutting Edge Productions, a subsidiary of McKagan Productions, aren't listed here. They are listed on that company's page.

† denotes writers who are inactive within the company at the moment 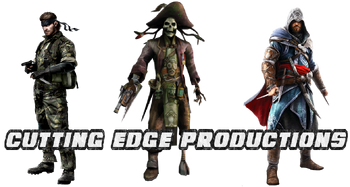 Cutting Edge Productions, run by Ned Edgewalker, has been a subsidiary of McKagan Productions since May 20, 2016.

This section is to list all of the pages published by McKagan Productions that won an award of any kind (FAOTW, Wiki Oscars, MGG, etc)

Retrieved from "https://gamersfanon.fandom.com/wiki/McKagan_Productions?oldid=739685"
Community content is available under CC-BY-SA unless otherwise noted.