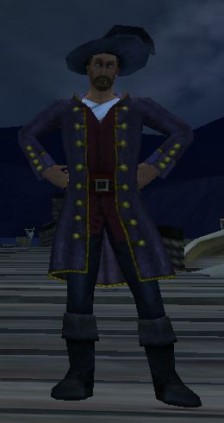 Matthew Omalley was only an infant when he was introduced to piracy. His father Eli Omalley an Irish immigrant finding new treasures to claim and his mother Spanish ambassador fighting with the French for the Caribbean islands. When Matthew was fifteen (15) he saw his father die at the hand of the EITC lord Benjamin Macmorgan. Matthew claimed that one day he would bring Macmorgan to his knees and rid the Caribbean of all EITC guilds.

He then grew up with his Spanish mother and grandfather Foulberto El Smasho. Foulberto had an immense debt to the pirate all pirates fear Davy Jones. Foulberto was the right hand man and First Mate to El Patron and his crew of legendary men including Juan Ponce Del Leon the founder of the territory named Florida.

When ever Davy got close to catching Foulberto, Foulberto always slipped through his fingers. As the attack on Ravens Cove commenced at the hand of Davy Jones and Jolly roger Foulbeto and El Patron were sneak attacked at there secret cave on Ravens Cove and were violently killed. So now as a replacement to Foulberto Matthew had to serve one hundred (100) years aboard the Flying Dutchman. At Matthews tenth year aboard the Flying Dutchman he escaped.

He sailed off and escaped from the cold dead hands of Davy Jones at the age of twenty (20) to become a pirate spy in the EITC guild The Co Empire where he found his only love Riverta Soulstealer. He was successful he became a general in there ranks of EITC and progressed on giving information to the pirate rebellion. Of course one of the EITC scum found what he was doing and he was sentenced to hang. He ran and was found hiding on the island he called driftwood.He built a house of wood and began to plot against EITC.

He built many unsuccessful guilds but now he has made a fighting force to finally destroy EITC for good. He is now married to Riverta with a child and is now the leader of the Pirate Rebellion and the president of the Pirate Council. I am now the owner of a large empire United Alliance which has been one of the best in the Caribbean but now i have retired from the guild community and resigned from my post as Guild Master of United Alliance to settle down and perfect my skills and become a master at all the weapons and skills the Caribbean has to offer.

Retrieved from "https://gamersfanon.fandom.com/wiki/Matthew_Omalley?oldid=707167"
Community content is available under CC-BY-SA unless otherwise noted.