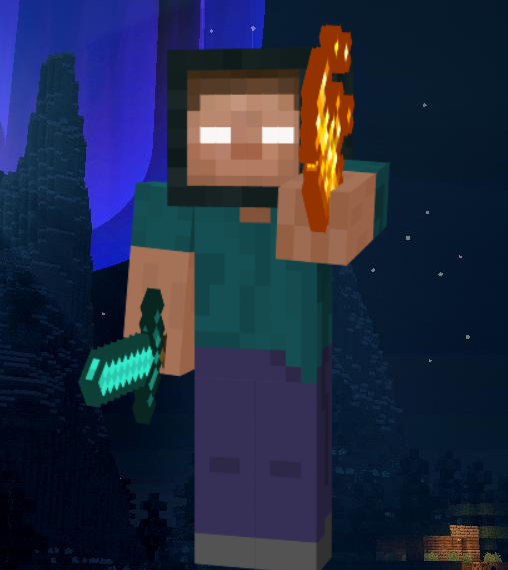 Lord_Ravenscar (formerly drlithium_) is the primary account and screename for Waglington, used for both roleplay and day-to-day survival. He's known to change his skin often, sometimes depending on his mood, but Ravenscar's primary aesthetic is of Herobrine. Though the account is used for all intents and purposes, he's notorious for never "breaking character," even as his colleagues go about their normal lives, particularly on CivCraft.

Artwork that his skin derives from.

The 133,337th Annual Gathering of the Lithiums, all of which are usually killed by the "Alpha Lithium," and shortly reincarnated.

Lord Ravenscar in his signature Herald robes, brandishing the Pivot of the Crucible.
Add a photo to this gallery

The Pivot of the Crucible - A Tinkers' Construct weapon forged by Dianite and gifted to Ravenscar, notably his signature weapon and a cross between a Rapier and a Broadsword. It does just over 10 hearts per strike, just enough to kill an unarmored player. It has some armor piercing capabilites, though diamond armor is immune to this effect. Being a weapon forged by a God with Thaumium metal, it has some effectiveness against Divine beings. He wields it fluidly, drawing inspiration from Hector Barbossa.

The Sword of Dianite (Original) - The very blade used once regularly by Lord Dianite himself, Ravenscar used it heavily during his time on CivCraft, "keeping it safe," as Dianite recovered from his defeat years prior. It was a Looting 2, Knockback 2 Sword made from Diamond and would see its final use some time before Ravenscar sacrificed it to revive Dianite. A new, more powerful Sword of Dianite would be forged by the God himself years later, though it is used so sparsely that few eye witness accounts exist. It is said, however, to be made of Tartarite, a material specifically fabricated to kill Gods.

The Bastardic Armor - On a Factions server long since destroyed, Ravenscar was in possession of a set of Iron Armor, each piece enchanted with Protection 4 and Thorns 3, though sadly not Unbreaking. After heavy use for about 2 weeks, the armor found itself on its last legs, being retired to Ravenscar's chest for several months before being worn for the final time on a climactic invasion that targeted a rival faction's city. The armor would ensure Ravenscar's victory, though it was destroyed in the process.

The Robes of the Herald - Formerly known as the Crimson Praetor's robes, these highly enchanted robes were used for both rituals and combat. Infused with a shred of Dianite's spirit after it was ripped in pieces prior to his revival, the robes are embroided with priceless gems hailing from the Nether and come equipped with countless talismans, rings, and other magical items to give Ravenscar and edge in combat. Resistant to all magical and physical attacks both conventional and unorthodox, it has a curious vulnerability to explosions, which dull its protective powers. Attempts to injure Ravenscar without first dulling the robes result in almost certain death inflicted by devilish vampiric curses and aura spells.

Note: Some roleplay elements are included for the sake of the character.

Originating from the mercantile port town of Dagrun, Lithium shared a strong bond with his childhood friend, Felix. A relatively peaceful gem of the holy world of Ruxomar, Dagrun was distinctly devoted to one of the three particular Gods of the land - that being Lady Ianite, Goddess of Justice, Balance, and the End dimension. As such, a vast majority of the town's residents worshipped Ianite, and only Ianite. As it happened, one of her followers was Felix himself. Lithium, on the other hand, was fascinated by the relatively taboo following of the mischiefous God Dianite, the Lord of the Nether (usually referred to as "The Slip" in Dagrun) and the finer arts of Trickery, Pleasure, and as it were, capitalistic values. Dagrun's resident Dianitist following, the Crimson Cult, remained extremely exclusive throughout its existence in the town, and all attempts from Lithium to join were quickly cast aside to his dismay.

Despite this conflict, Felix and Lithium would grow up relatively apathetically of their differences, instead favoring friendship over bitterness. The two would grow up without homes, wandering the cobblestone streets of the quaint town as two wayward souls destined for something greater than a life of ruffianism. The two would often approach fruit shop owners on the streets offering them protection from thugs for a price. When they refused, they would often commandeer the fruit shops and claim them as their own, splitting the profit for as long as they could before the Iron Golem authorities could catch up with them. Felix would justify his actions as "restoring the balance," almost viewing himself as a sort of Robin Hood, though this fantasy would change as he grew older. Meanwhile, Lithium would argue that sometimes the world simply needed a spark so the "flames of justice," could be lit. They soon began to realize that their ideals may not have been so polarizing after all.

However, as tensions between the Gods of Ruxomar escalated, a rift would form between the two teenagers. Mianite, God of the Overworld and Order, had begun to slowly seize control of more and more cities throughout the land by offering them protection from the influx of monsters that had begun to plague them on the condition that they worshipped himself - only himself. Towns that worshipped the other two Gods, especially Dianite, became exceedingly rare as the hordes of undead grew. While Lithium loathed Mianite and was distrustful of any of his actions or followers, Felix saw little wrong in the actions of Mianite, viewing any sort of protection necessary at any cost.

to be edited maybe haha

Retrieved from "https://gamersfanon.fandom.com/wiki/Lord_Ravenscar?oldid=721570"
Community content is available under CC-BY-SA unless otherwise noted.