Jack Hirsch was born in Hirsch Manor, in London, England, in 1724, to Jeremiah and Samantha Hirsch. He was cared for greatly by his mother, Samantha, and was taught how to read, compose music, sail, and fence at an early age of 6. His father, Jeremiah Hirsch, was a Vice-Admiral in the Royal Navy, while his mother Samantha Hirsch was a tailor. Jack also had a brother, Timmy, and a sister, Courtney. They were incredibly rich, due to his father's fame in the Royal Navy. Since then Jack and his family had been living in complete luxury.

One day, when Jack and his siblings were out fishing, his mother came running towards him looking terrified. She stuttered a little when she finally said "Your father! Jeremiah! H-h-he came crawling home covered in blood with two d-d-daggers stabbed into his knee and c-c-chest!". Jack, Timmy, and Courtney all got up at once, dropping their fishing poles. "WHAT?" they said in unison. When Jack and the rest got home they found their father sprawled across a table. He was bleeding all over. Jeremiah told them that he was not going to die, and god would not let this happen, not yet. In two days, that sentence rang true, for he was healed. Jack learned that his father was stabbed by two pirates when trying to fight them off, when they raided Fort Charles, and he crawled all the way back home in agony. Jack was amazed at his father's bravery, strength, and determination.

For his courage, incredible strength, and determination to keep Port Royal safe from pirates no matter the risk, Jeremiah Adrian Hirsch was promoted to the rank of Admiral. The family was so proud when they found out. Jeremiah was given a badge to show his new rank, and even the title of Captain of the HMS Enchantress. Jeremiah then took long voyages with the Navy to hunt and bring to justice any last pirates in the Caribbean, making little time for Samantha and his family. 1 year later, the HMS Enchantress was destroyed by the pirate lord, captain Jacard. Jack's hatred of pirates increased significantly since this happened.

Since the destruction of the HMS Enchantress, Jeremiah spent much more time with his family. One night when Jack, Timmy, Courtney, and Jeremiah were fishing on a fishing boat, the sky turned very dark, and the wind started to howl. It all happened so fast. It started to rain lightly, then very hard, and thunder rang. The family agreed to sail home. When arriving at their destination, palm trees were blown down all over the beach. They quickly ran home, and their mother was waiting for them. They hid in the large basement they owned for about two days until it passed. They lived on water, rum, bread, and lamb chops. When the storm passed, they all soon found out that their house and many others were blown away by the hurricane. The storm also took their stash of gold, leaving them broke.

They decided that it wasn't going to get better for them here at Port Royal, and moved to a far-away island name Emeralds Isle. They all made their living with their talented skills in the arts. Jack soon become a renowned musician and composer! They quickly made money, and lived in luxury once again.

Life in the Royal Navy

Being Recruited and Promoted

Just a few years later, Jack Hirsch left to join the Royal Navy to follow in his father's footsteps who had just died many moths before he left. He didn't think much on this matter, but just left, thinking he would be able to withstand the internal pain of leaving his family if he didn't think on it too much. He was right. Jack soon forgot about most of his family, and headed out to join the Royal Navy. Jack was accepted! In fact, Jack showed so much skill in his training, that he was immediatly promoted to Lt.! He was assigned many jobs and completed them in outstanding time, all while composing many nice sea tunes to keep the Navy going.

Jack Today Jack is twenty years old now. He is currently a Lt. - Colonel in the British Marines and East India Trading Company. He is most loyal to Lord Coaleaston, Lord Daggersteel, and King John Breasly. Jack is a mastered swordsman and is almost impossible to beat. He favors El Patron's sword, and the Seven Seas Cutlass. Jack has made many enemies over the year but only two of them have made his most wanted list. Jack currently has no children, but has some "feelings" for a pirate by the name of "Lamora Rayes". Jack spends most of his time traing his men in the Marines, and composing his masterpieces in his sparetime. Jack has been GM of many guilds but none have been successful. He is currently in the guild "The King's Marines", led by Sir Johnny Coaleaston. He will stop at nothing to protect his comrades, and will die anytime for England and the EITC.

Jack is an almost unstoppable fighter. He is very fierce. His weapon belt consists of Seven Seas Cutlass, Holy Repeater, War Bayonet, while the open slots vary. Jack prefers sabre in PVP because of its rapid attacks which hardly give the opponent any time to strike back. It's a fact: Jack IS unstoppable in battle whenever he uses his Holy pistol. To kill a maxed pirate, it takes only three shots with a Holy Repeater for him, and he is currently only Lvl 44! Jack believes in fair play and will threaten if it is not taken into consideration. Jack uses little magic, but DOES own a wand. It is made of oak, 17 Inches, and Phoenix Feather for the core. When using magic he prefers to chant inside his head, which can only be done by a professional wizard. Jack does have his own spells that can only be used by him, but will not put them give them out in public for prevention of misuse. 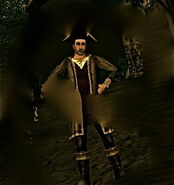 A stained and battle-damaged portrait of Lord Jack Goldwrecker 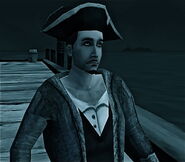 Jack in his office on Padres 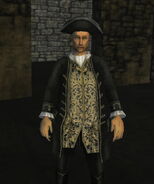 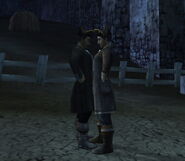 Jack and his crew traveling to London! 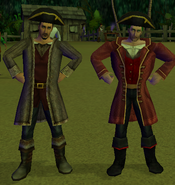 "Together we prevail, in wisdoms we trust. I hate the phrase you know. It's more like i'm better then you and you lose!"

" ***Enemies Name***, come out to face your destiny. I have chased you from island to island, server to server. It all ends here. Now. Right now"

"Don't you turn your back on me!! I want to see the look on your eyes when I kill you!"

"It's impossible to insult me you know? I take everything as a compliment!"

"Only a bloody dutchman."

"Lets finish this the way it started. Together!!"

Jack's Last name is Hirsch and it is german.

Jack plans to use magic to stay alive as long as he can.

Jack never wears the official EITC uniform because he disposed the adventure quest clothes, so he takes on the clothes of a High Lord or Diplomat Soldier.

Jack has been shot many times, at least 8!.

Jack has a hard time deciding what clothes to wear...

Jack loves his bright blue and ruby ring, because ruby is his birth stone, and bright blue is his favorite color.

Jack is loyal to America, Germany, England, And France, but rarely Spain.

Jack loves to argue/debate, and believes everyone is an equal, and that god made us physically and mentally unable to control another human being.

Retrieved from "https://gamersfanon.fandom.com/wiki/Lord_Jack_Goldwrecker_of_the_East_India_Trading_Company?oldid=741771"
Community content is available under CC-BY-SA unless otherwise noted.