Start a Wiki
Life Sword is a cutlass used and owned by the Life Lord or Captain Shadow Sail. 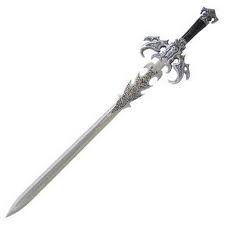 Made by Master Ex about 10 years ago, this is a sword made by Captain Shadow Sail for him and only him to use. There is only one copy. This sword has very unique and powerful powers. Many people crave this sword and would spend years upon years looking for it. But, they do not know, there is only one copy, and it will stay that way, as said by Shadow himself. It took him only 1 month to make this sword for, he needed the sword quick, as the new Life Lord, the old one challenged him to a battle on Port Royal. The winner would be the Life Lord.

Shadow walked into the arena, not bragging or anything, and took a simple bow as a response to the clapping. Were as, Johnny Von Roggle, walked into the arena shoulders held high, kissing to the crowd, and bowing dramatically. Shadow didn't believe in bragging, and he thought those who did were... "Bilge Rats!" He once said. There was 5 minutes of prepping and the battle began. Johnny reached for his voodoo staff, but before he even could place a finger on it, Shadow had an army of the undead that he transformed into the living attacking Johnny without even breaking a sweat. The battle was over, and that was that Shadow had become the new Life Lord.

Retrieved from "https://gamersfanon.fandom.com/wiki/Life_Sword?oldid=753752"
Community content is available under CC-BY-SA unless otherwise noted.