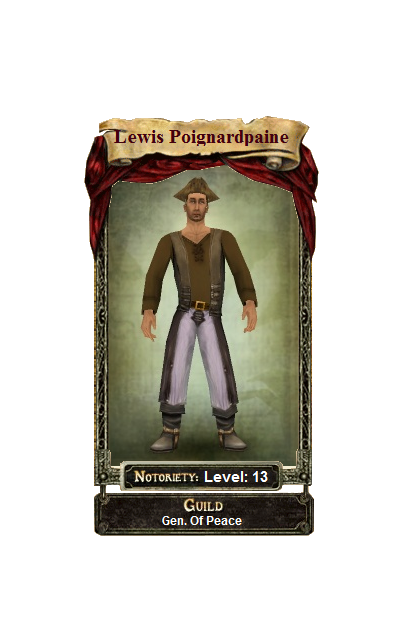 Lewis is one of the secondary pirates of Lawrence Daggerpaine. He was first made to be a spy, but not on the Navy or EITC, not even other guilds. He was made to spy on Lawrence's own guild, the Gen. Of Peace. He was made when the guild was in a state of unease, and there were many fights and on the verge of breaking apart. Lawrence had another spy, but had to delete him due to having to blow his cover after unmasking a plot to take over the guild by one of the officers. Lawrence never uses Lewis anymore and the guild is more or less peaceful now, so he does not need to have a true spy anymore. Fun fact: Poignard means Dagger in french, so Lewis' full name is Lewis Daggerpaine.

Retrieved from "https://gamersfanon.fandom.com/wiki/Lewis_Poignardpaine?oldid=706996"
Community content is available under CC-BY-SA unless otherwise noted.