La Mafia is a powerful organized crime and business cartel based in the Caribbean. It is run by two Godfathers, The Godpistol and The Godhermit, who have become feared and respected in the seedy underbelly of the Caribbean.

La Mafia has gone beyond petty crimes and has used their vast funds, extracted from the profits of their crimes, to begin several businesses, expand their criminal activity, buy rackets and keep the authorities and several influentials at bay.

The Godfathers oversee everything to do with La Mafia, and nothing changes without their consent. Their word is law, and everyone who doesn't know this will learn it the hard way.

Consigliere Law is, quite ironically due to his name, the man who deals with all the legal (or lack thereof) business, makes sure bribes get to the right people, the authorities and influentials are payed off and most importantly, acts as an advisor to the Godfathers.

The Underboss heads the Dons, makes sure everything is in line with the cartel and generally runs things in the place of the Godfathers (but his position is not absolute, and thus the Godfathers' consent is still required).

The Dons handle different aspects of the cartel, ranging from crime to racketeering and much more. A Don has several men who work under him, including at least one Caporegime, some footsoldiers and several goons.

The Caporegimes, are like captains, when their Don gives them orders they will usually act on his behalf and command the footsoldiers and goons in their assigned task.

The footsoldiers are the men on the street doing all the dirty work in the name of the cartel. They usually travel and work together and have absolute loyalty to their superiors, especially the Godfathers.

The goons are right at the bottom of the La Mafian heirarchy. They do the most basic and petty jobs, or keep things running with the small work.

La Mafia was formed by four men, who founded it to expand the businesses they already owned, but it grew quickly and became very powerful and influential. The true identities of the founders, as well as the other members of La Mafia, are kept confidential. Members of the cartel take on aliases to keep their identities hidden. The four founders of La Mafia are The Godpistol, The Godhermit, The Godrat and The Godskulltula.

The Godpistol and The Godrat were writing a play at the time, and both were almost financially ruined. They needed a theatre to showcase their production and a company to fund its production, but they could afford neither, so they came up with a solution. They had two accomplices, known only as The Godhermit and The Godskulltula, who were already in a part-time business and some petty crimes with them. Together, they planned to form a production company that would take the monopoly, but once again funds were a problem. They turned to crime, and through some contacts of The Godskulltula were able to hire some low-cost goons who only demanded a place to sleep, safety and good Italion food as payment. The Godskulltula's aunt, Mama Rita, was perfect to provide the food, and so she was brought on as the first associate.

Before long the business had grown, profits had trebled and they were almost ready to fund their production company. More goons and a few footsoldiers were hired, and eventually there was enough income to keep the business stable and form La Mafia Productions, and they did exactly that. When news of the production company's success spread, a lot of veteran criminals wanted to join the cartel. Soon, wealthy people also joined, seeing a chance to make more money than ever. Thus, the cartel grew and the Dons and other ranks were established.

The Godskulltula, used the money he made from La Mafia to expand his external businesses and eventually became so preoccupied with them, that he retired as Godfather. Due to pressure from the authorities and fear of eventual arrest and execution, The Godskull and The Godrat also retired and are believed to live out their lives under their true identities.

Galaira is the base server of La Mafia and all its crime, trafficking and other dealings. It has many bases in the server, some are open to the public for meetings and business, while others are at undisclosed locations. 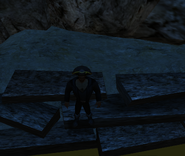 Padres Del Fuego Base
Add a photo to this gallery

La Mafia works alone. You are either in the cartel, an associate or you are against us. Capisce?

Anyone who isn't with us, is considered against us. The following is a list of our mortal enemies:

Retrieved from "https://gamersfanon.fandom.com/wiki/La_Mafia?oldid=725327"
Community content is available under CC-BY-SA unless otherwise noted.